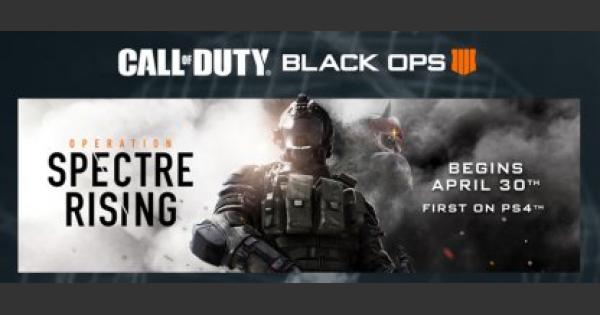 The new season for CoD: BO4 has arrived on the PS4, and now PS4 COD Black Ops 4 players will be able to access a new set of content.

As with usual content updates, PS4 players get access to the update first, with other platforms following a week after.

As with the new season, a new Black Market Contraband stream has been introduced, along with 50 new tiers for players to earn rewards from! The stream is much shorter to align with the upcoming Days of Summer update in June.

Weapon Charms & Death Effects will be introduced to the Black Market which further enhances customization of characters in Black Ops 4. Charms dangle on your weapon, while death effects changes the blood spatter effect when you kill an enemy.

Black Ops Pass holders will also get new content, including 3 new multiplayer maps, and an older Frank Woods as a playable character for Blackout!

Information on this section was taken from the official Treyarch blog post of CoD: BO4.

Black Ops 3's assassin Spectre makes a comeback and will now be a playable character in both Multiplayer and Blackout. Spectre is unlocked by completing the first tier of the Operation.

Spectre's Specialist Weapon is the Shadow Blade. Once activated, you POV switches to third-person, and allows you to dodge incoming bullets and kill enemies with one strike.

Kill In The Cover of Smoke

Spectre's Special Issue Equipment is the Smoke Grenade, which reduces visibility for all players except you. All enemies will be visible through the haze.

Play hide and seek in this new fun mode! Choose a prop and blend in with your environment, while the enemy team searches the map for players disguised as props.

Later in the season, the classic Capture The Flag mode returns to Black Ops 4. In this mode, players will need to pick up the flag from enemy territory and return it to the base.

More alternate weather variation of maps will also be introduced in the new operation, with Hacienda Twilight to be released in the new update.

A new suspension system is introduced for players who leave or disconnect from matches. When players leave a League Play match, players will be banned for a brief period of time. They will also lose more points.

Check Out How To Rank Up In World League Mode

Matchmaking has been improved to fix skill-matching issues in order to reduce match quitting.

With the new Operation, updates will be made to Blackout mode.

Hydro Dam has exploded and certain areas in Blackout map have been flooded. Low lying areas can now be navigated using a boat. Take the high ground and change your overall approach and strategy for Blackout!

Players With Most Kills Are Marked As Targets

Players with the most number of kills will be marked as bounty targets which only Spectre can see. Eliminating the target or surviving the Bounty attack rewards the player with a Supply Drop.

Unique to this mode, players will be able to perform dramatic finishing moves on downed enemies.

Later on in the season, a new game mode called "Ground War" will be introduced in Blackout, which turns the whole Blackout map into a huge large-scale team vs. team warzone.

Check Out Down But Not Out Here!

Other Changes To Blackout

More Gauntles On The Way

Labors of Hercules for Ancient Evil and Hard Mode Gauntlets will also be introduced later in the season in Zombies mode.

This features ensures that you'll never have an empty Elixir in a zombies match. Emptying an Elixir during a match replaces it with a random Classic Elixir.