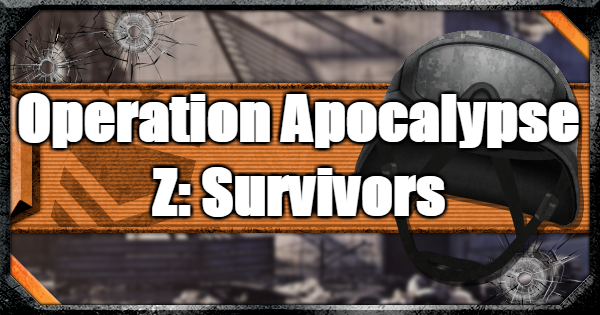 Operation Apocalypse Z is now available on PS4. This update will become available on Xbox One and PC later on.

The Infected: Final Stand LTM is now available to play. The game mode adds to it game-changing twists to keep the action fast-paced, and competitive!

Check Out the Infected Mode Here!

Play As Survivors Or Zombies

In this game mode, players will be divided into two teams: Survivors, and Zombies. Each of these teams have a goal they need to reach in order to win a round. First team to win four rounds wins the match!

Survivors will be able to choose from a set of preset classes. You will need to eliminate all enemy Zombies, or expire the time limit to win. All Survivors will only have one life, but can be revived when they are downed.

Zombie team members will only be armed with Bowie Knives, and Combat Axes, but will have a limited number of respawns throughout the whole match. Zombies must hunt down and eliminate all survivors within a time limit to win!

The M16 tactical rifle and the Havelina AA50 sniper rifle have been given Create-a-Class support in Multiplayer. You can now build around these weapons when creating custom classes.

The S6 Stingray Mod has received some tuning changes, while the Daemon 3XB "Imaginator" Mastercraft leveling issue has been addressed.

Blackout receives a new LTM: Pandemic. In this mode, 80 players drop down on the map. When you are eliminated, you get to become a Zombie, and hunt down those that killed you!

You will only turn into a zombie if you are eliminated. As a zombie, you will have super speed, higher jumps, can stay underwater longer, can track enemies on the maps and more! You will also be equipped with two Hell's Retriever axes.

Zombies will respawn in waves every 10 seconds. This means that the horde will grow with every survivor eliminated, and gives you as many chances as to turn as many enemies into zombies before the match ends!

A new vehicle makes its debut in Blackout. The Tactical Bike is a motorbike vehicle with a sidecar attached to it. It seats a maximum of one driver and passenger, and can be found around the Blackout map.

A new Gauntlet at Camp Edward called Duck and Cover is now available to play. This gauntlet features 30 round of challenges, and rewards you with Nebulium Plasma, and Calling Cards at rounds 10, 20, and 30.

Players will now be able to access the Ray Gun MKII in Mystery Boxes for both Blood of the Dead and Declassified maps. Standard Ray Gun MKII blasts also now penetrate, allowing you to efficiently deal with hordes of zombies.