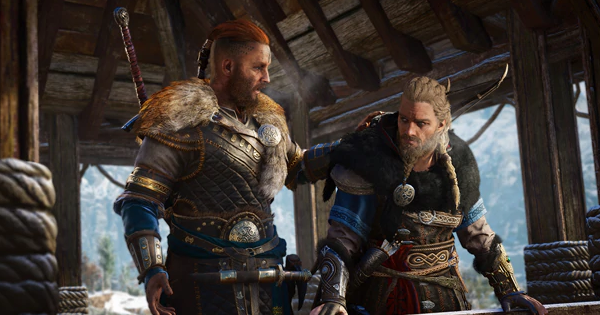 A warrior renowned by their tribe for their battle prowess, Eivior escapes Norway with their tribe to England to seek a better future. A new kingdom awaits and Eivior stands with his brother to make it their new home.

Can Be Played As Male Or Female

Just like in Assassin's Creed Odyssey, the player can choose to play Eivior as either male or female. The story will still play out as it should, whichever gender you choose.

Does Not Affect Relationships With Characters

Sigurd is Eikior's brother and a fellow norse warrior. Eikior has a duty to their brother, but they find conflict when Eikior seeks their own glory.

Currently unnamed, Sigurd's Wife dons armor similar to that of Eikior and her husband. She shows a brief apprehention to the men brought by the brothers to their village.

Also unnamed, but show in the Story trailer, a man wearing what looks to be an Assassin's Hood joins the village. He also follows the clan when they set off to England.

An important figure in England, Alfred of Wessex is described as cunning. He leads an army that follows a more strict and organized vision.

The complete opposite of the organized army of Alfred Of Wussex, the Sons of Ragnar Lodbrok are more barbaric. The trailer shows vividly how they hang the people they kill.