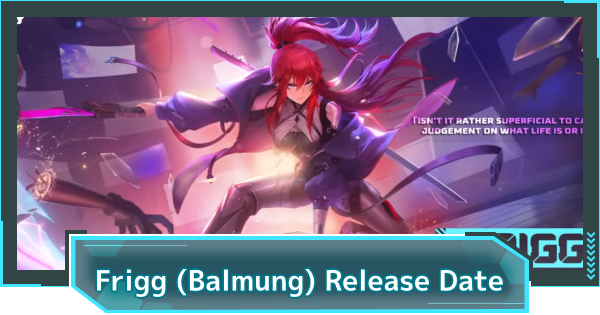 Frigg's release date is scheduled for September 1. Since the Nemesis banner should be ending, you should consider saving up your Red Nucleus for Frigg, or continue pulling on the Nemesis Gacha.

▶Red Nucleus - How To Farm And Get

Easy to Use Simulacra

Judging based on the trailer, Frigg's attacks are similar to EM Blade and the SSR Weapon Crow (Thunderblades) that we already have on the initial release. However, her attacks seems to have longer reach and the attack speed is slightly slower.

Viable for PvP and PvE?

Currently, Frost attribute weapons are widely used in PvP. If this weapon has an Elemental Resonance similar to Nemesis, it is the best weapon to be paired with Meryl (Rosy Edge)

Since Frigg (Balmung) is not a shield-breaking weapon, Meryl (Rosy Edge) should still be in the party. In the past, it is usually paired with Tsubasa (Icewind Arrow) and in PvE content, it is replaced with Cocoritter (Absolute Zero) to support allies.

Frigg is voiced by Shizuka Ito. The shows in which she appeared are as follows.

Important Character In The Story

She is the first character that you will see when you start playing Tower of Fantasy, She appears in Chapter 1 and continues to be involved as an enemy during the main storyline in Astra region.

The proud flames of the Heirs of Aida; and the scarlet nightmare of Hykros.

You will know her red hair, her sword, and her name:#Frigg pic.twitter.com/kcqH47OJPY

"Isn't it rather superficial to cast judgment on what life is or is not?"

Frigg has completed the objectives of the Heirs of Aida time and time again with her top-notch fighting ability and unrivaled determination. #ToF #TowerofFantasy #ToFShowcase pic.twitter.com/JsIiu9plGg

Do you even play the game? Frigg is one of the best ice DPS, you can't compare her to a SR tank... Even at C0 she is way stronger than C6 Ene. Guides like this just spread missinformation and confuse new players that don't know how the game works.