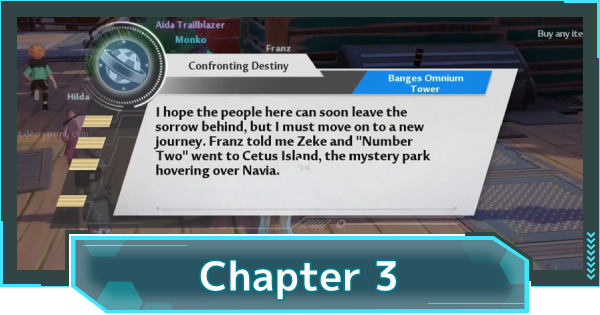 Chapter 3 Confronting Destiny for Tower of Fantasy (ToF). Check the full walkthrough guide on Episode 3 including boss guides, tips on story quests, rewards and more in this guide!

Chapter 3 Walkthrough (Up To Arrival At Cetus Island)

Head To Navia After Talking With Franz

After talking to Franz, leave through the exit above on Banges and head to the point indicated on the map. If you follow the guide, you should be able to get there without problems.

Intercept The Attacking Ravagers During The Hot Air Balloon Ride

Several Ravagers will attack during ride. The Omnium Handcannon will be used to intercept the enemy, so be sure to focus on the enemy and destroy them one at a time. Since items cannot be used, be careful of your remaining HP.

The enemy in the hideout will not notice you, so take out the hyena shooter who is watching from the top of the building. Aiming for a headshot with a Bow or any similar ranged weapon to take them down easily from a safe distance.

Toss The Hypnosis Fruit In The Middle Of The Camp

Chapter 3 Strategy Walkthrough (Up To The Battle Of Nemesis)

If you follow the directions, you will arrive at the location of the Hyena's Cannon. Return to Hanna's location, however be careful of being targeted as you will be bombed on the spot. You will be required to gather 4 Mistblooms and when you hand it to Hanna, a smoke will form around the turret, so take advantage of the smoke screen to approach the Hyena's Cannon and destroy it before it clears.

Examine The Terminal On The Table

After defeating the aberrants and talking with Hanna, examine the terminal on the platform to proceed with the event. Be careful not to go beyond the yellow circle marked on the map, or you will have to start over.

Defeat All 9 Enemies In The Hideout

Once inside the Ravagers's hideout, you will be confronted with nine enemies. Due to the large number of opponents,  bring them to eliminate each one separately while keeping a safe distance from each other to prevent getting surrounded. You will be battling on a machine, although it is possible to switch weapons and battle in normal mode.

Once all the enemies in the stronghold are defeated, a battle with the boss "Aberrant Goliath" begins.There are numerous huge swinging attacks, but not many elements to struggle with. Pay attention to the remaining HP as you engage in a series of battles. When the opponent's HP is reduced by a certain amount, Sieg and Frigg will join in and take down the boss.

When the experiment begins, the robotic arm goes out of control and it becomes Nemesis. As with regular bosses, the Story progresses by cutting off HP, so let's put Attack in and take them down. The enemy's pre-attack motion is easy to understand, so it is not difficult to destroy them if you fight while avoiding them.

Chapter 3 Walkthrough (Up To Tower Shutdown)

After finding Mi-a and entering the ship, the battle with Hethlu begins. The most important thing to keep in mind is the discharge Attack, and it is recommended to leave the circle as soon as the red circle appears. If you are surrounded, you will have a hard time, so be sure to kill the normal enemies at the entrance beforehand.

As you follow Black Dog, a Time Retractment mode will begin and there are certain scenarios where time returns many times on the way. Proceed with the event according to Claire's instructions. While "Try again and again (--%)" or "Call the doctor" is shown in the guide in the upper right corner of the screen, it is OK to wait until the percentage reaches 100%.

Aegis uses a lot of flying tools, so try to fight as close as possible. Although many Attacks are relatively difficult to avoid, its attack power is low, so it is recommended to concentrate on attacks even if you are hit by a few bullets.