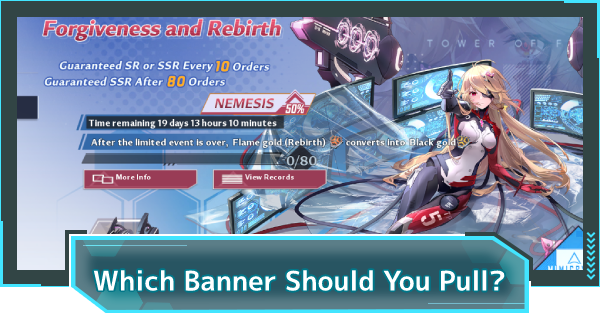 Tower of Fantasy | ToF
Which Banner Should You Pull? | Special Orders Gacha Guide

Which Banner Should You Pull?

SSR Weapons/Characters have low GS or combat power than fully upgraded SR, unless they are 3 or 4 Stars. Chips (Matrix): No Star SSR has greater power than a Max Star SR and has lower pity compared to the character. It's better to power up a weapon with Chips!

If you view it from a long-tern POV, it's better to pull on Limited-time Gachas. Starting with the current banner, most of the Weapons that will be added in the future will be stronger than existing Weapons, so if you want to use them for a long time, pull for the limited-time gacha.

A Gacha that can be pulled with the use of Gold Nucleus. Since there are many ways to collect Gold Nucleus, you can use easily pull and acquire SSR Weapons. However, some weapons, including those that are current considered powerful, may become obsolote in the future so this Gacha isn't that recommended.

It was found that the Weapons in the Gacha is different in China. Some have been weakened, while some were strengtened when implement in Japan. This does not mean that the weapons coming out in the future are stronger.

Unlocked at Level 20, this Gacha Banner provides Chips or Matrixes. Weapon are less capable than fully starred SR, unless they are ranked at specific degrees so it's better to use Chips to upgrade them. This has a low pity number and easy to pull on, making it the easiest way to strengthen Weapons.

SSR Chips Are For Experts

Since SSR is an item to be attached to a weapon, even if you get an SSR, it's not the same feeling as getting the rarest item like with Weapons. It's hard to be happy about it so it's better to pull on it only when you have a Weapon you really like.

This Gacha requires Black Nucleus to pull, which are easily farmed from playing the game, including exploring the world. SSRs are occasionally available in the banner, so pull on them, but your main point in pulling here is to get Weapon Upgrade materials.

No Schedule Confirmed Yet

At this point of writing, we haven't confirmed any official information about banner schedule. However, given the design of the game, banners will be updated in the future. We will update as soon as new banner schedule is disclosed by the official.