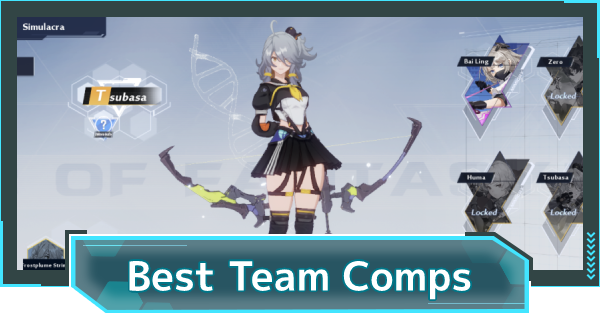 Best Team Compositions for PvE and PvP in Tower of Fantasy (ToF). Includes the best team building, how to build the teams, the team combos, and the rating for different scenes.

Utilizing the Volt Elemental Resonance of Nemesis (Venus) is currently the most stable way for PvE. Scythe of the Crow can be repalced with Thunderblades if you have confidence to trigger Spiral Drive using the Jetpack.

The team build above is highly used by the high ranked players in Bygone Phantasm. Almost all of them use Venus, indicating that it is indispensable.

A team which utilize the Ice Elemental Resonance of Frigg. Depends on the enemies and the way you fight, the weapons can be replaced with Cocoritter (Absolute Zero) or Ene (Pummeler).

Make a Good Use with Icewind Arrow

The Sharp Arrow which is activated with one star increases the damage greatly. Granting stacks of attack at once after acquiring this buff is a powerful way to battle as an Ice Team.

Inflicting the debuff [Grievous] to increase the damage given to enemies makes it a nice Support Role, you can use it freely even without spending a lot money in the game. The advancement with more stars lets Guren Blade become an Attacker. No need to build teams only with the physycal-damage weapons, they can be replaced with other elemental weapons.

The best team build for PvP. Starts with reducing the speed of Venus's Dodge Attack, charges the Discharge Skill of Absolute Zero, then cuts down at once with Rosy Edge or Molten Shield V2.

A team which utilize the Whirlwind and the discharge skill of Rosy Edge. Since the melee attacks with lots of movement are easy to avoid or be alerted, try to limit the actions with relics or weapon skills to make it hit the target.

The discharge skill will hold back your allies' actions. It'd be better to use Chakram of the Seas or Scythe of the Crow in team play.

The strength of this party is easy to understand, it is the powerful ongoing damage by Scythe of the Crow. It can also fight technically with Molten Shield V2, making it a steady performance in both PvP and PvE.

Suited for Battles with Multiple Enemies

Not only the weapon but also the matrices and the skill of Simulacra give King more advantages when he faces multiple enemies. This party can not only be used to against the enemy who is weak to fire but also deal with lots of scenes.

A team which utilizes the strength of the motion of Dual Pistols. The dodge skill to strongly suspend the enemy is powerful. Also, Samir's awaken traits can increase the damage when she receives no damage, it means the technique of evasion is required. It is a highly challenging team whose strength depends on the player's skill.

It is hard to win in PvP when you are aginst Omnium Shield which is good at melee attacks, or those relics that creates obstacles. Please take a melee weapon as a sub when you are in PvP.

A team which utilizes the effect [Benediction] of weapon resonance. With the Benediction, the amount of healing in team play will be further increased to a different level. You should bring one when taking on strong enemies.

Focused on Cocoritter To Equip

In addition to increase healing by the awaken traits, the Matrix set effect of Cocoritter can also raise the attack of alies who received the healing. If you are the Support role in team play, you should enhance all the contents related to her as much as possible.

A multi-specialized team which aim to the [Fortitude] by weapon resonance. They pull aggro towards themself for reducing allies' damage to keep them alive. It might hold back your allies' attacks when using Rosy Edge, be sure to use it at the right timing.

Chage the Relic or the Awaken Trait Before PvP

The composition might be similar to the Ice Melee Team depending on the player's skill or movement. Try to switch to an Attack team when taking on PvP.