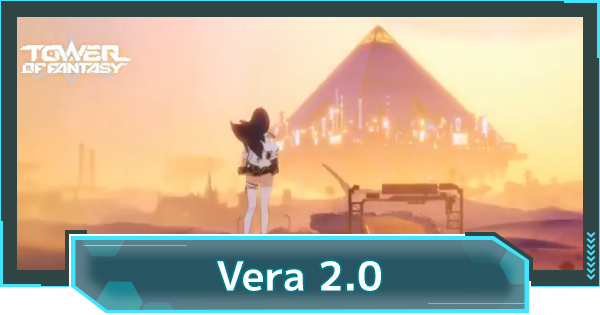 Vera 2.0 Sneak Peek in Tower of Fantasy (ToF). Check out the release date of Vera, the new upcoming desert map including Mirror City, a new level boss, and characters in the story!

No Specific Date Yet

Aside from the Vera 2.0 Sneak Peek trailer for the upcoming massive update in Tower of Fantasy, no release date for the content has been announced yet as of the moment. Future updates will be gradually released on ToF's official Twitter account so stay tuned for upcoming news!

Is The New Map A Desert Area?

In the official statement, Vera is a lost region that was under the jurisdiction of The Seventh District of Hykros before the Cataclysm happened. Its environment is dominated by a vast deserts and pyramid like structures can be seen as well, suggesting that the new continent will have an atmosphere similar to that of Egypt. It is also said that although most of the surface environment can be used for human activities, the majority of people in Vera live in a place called Mirroria.

Vera Already On The World Map?

Vera can be seen on the World Map. However, it is not possible to check it at the moment and may be only accessed once it is released.

Suspended mid-air above the hot desert is a floating pyramid that holds a futuristic city inside that has developed differently from Hykros in Aesperia. This Mirror City will be the starting point in the story.

Two new characters appeared in the official movie. One is a girl who handles an iron fan dressed in a school-like uniform. The attack range is predicted to be in the mid-range based on the trailer of the female model of the iron fan.

The second new character can be seen as a girl attacking a boss and was doing a flame-like attack with a machine that seems appears to be able to do long ranged attacks.

There is another figure that appears during the official movie. It may be an existing character, but it is also possible that it is a new character.

An enemy that appears to be a new boss monster also appears in the trailer. It may be a boss monster with a special way of moving, as there are scenes where it is swallowed up into empty air as well as its ability to hide in the sand.