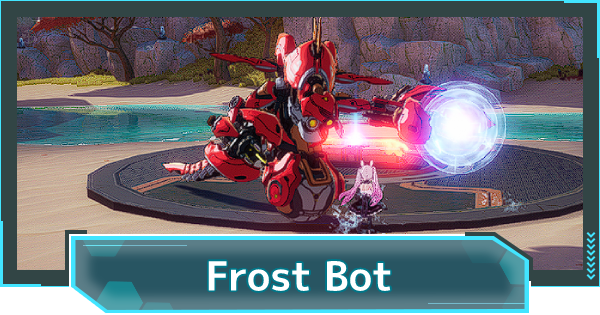 Frost Bot is a world boss in Tower of Fantasy (ToF). Learn its map location, insta kill attack, weaknesses, drops, and how to defeat it using strategy tips in this Frost Bot guide.

Frost Bot has a weakness to flame attribute, and the above Weapons have a high DPS value, making it easier to avoid gauge moves. If frozen by the Frost Bot gauge attack, anyone frozen will die instantly after the countdown, so it is recommended to press the break button several times to remove the frozen state and help unfreeze allies by attacking them within the time limit.

DPS Weapons Are Prioritized Against Shields

Frost Bot's gauge attack move after failing to completely destroy its shield is a very nasty, wide-area, instant-death attack. Once the shield is activated, switch to weapons with a high DPS to quickly destroy it.

Status Disables Can Be Used As Counter Gauge Attacks

The ground Tame Attack of the SR Weapons Pummeler may be used to counteract the freezing effect of the gauge attack. If you believe the shield will not be shattered in time, simply use the Pummeler's Tame Attack to match the enemy's movement.

Use Jetpack To Avoid Freeze

Freeze Time With A Perfect Dodge And Unleash SS

Frost Bot have many attack moves that have no gaps, and once they hit, they may continuously take damage. If you are aiming for a Phantom Time, it is recommended dodge before the monster hits to trigger it and build-up your weapon’s energy while also freezing time for a short period. Switching weapons will trigger the combo attack.

How To Perfect Dodge Attack

The Frost Bot's Frost Sphere move is a difficult attack that freezes the anyone hit for nearly 3 seconds and then continuously attacks it. Get close by dodging to reduce the risk of being hit by this move and aim for a Phantom Time, so it is a good idea to get close while charging at medium range.

Move Away From The Enemy When A Wide Red Circle Appears

The most important thing to keep in mind is to use a wide range of freezing attacks; once frozen, they may continuously target you, so when a large red circle appears, either move away quickly by dodging or use a Special Attack.

If any of your allies are frozen, be sure to hit them to unfreeze them, as they will take instant-death damage at the end of Frost Bot's Freezing AoE attack. Remember that you can avoid damage by using the Discharge Skill during the freeze countdown, when there is only one second left.