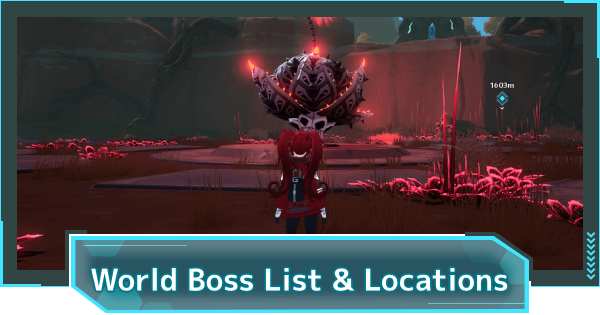 Powerful Enemies You Can Encounter

There are extremely powerful enemies that can be seen in the world map and they are difficult to beat if you are alone. SSR Weapons and Matrices can be obtained from them as a reward if you are able to beat them. Team up with other players if you are going to try and beat this content.

How To Participate In World Bosses

There are no special conditions required to challenge a World Boss and anyone can participate as long as they are able to head to the Boss' location. If you cannot stay in an area for a long time because of the radiation. It means that your level is not high enough to explore this area.

One World Boss On Each Area

Since only one World Boss will spawn for each location, you will need to change channels if the boss that you are aiming for does not appear. They will also respawn every hour so you can just wait without changing channels.

The World Boss' level will increase or decrease depending on the player's level. Even if you form a party, the level of the World boss will not adjust and will display the same level as you. Its level will be different for each player if the players in your party does not have the same level.

Besides the number of players, playing with a party also provides weapon resonance bonus. Therefore, even if the World Boss' level differs from player to player, it is easier to beat the boss by grouping up rather than fighting it solo.

Multiplayer Guide - How To Coop

After defeating the World Boss, you will be able to decrypt a Password Chest. This chest will require you to have a Type III Chip. You will not be able to receive an SSR Weapon or Matrix if you do not open it with Perfect Decryption.

You Must Attack To Claim Rewards

The first World Boss that you will be able to challenge is weak against Fire. Equip a weapon with Fire Attribute before you take on this challenge. The World Boss will also summon additional mobs during battle. Therefore, it is easier to fight with weapons that can hit multiple targets like Scythe of the Crow or King's SSR weapon.

This World Boss can be located in Banges Industrial Zone. This Boss' attacks can cover a large AOE, so try to carefully time your dodge. It can be difficult to fight at close range, try to use long-range weapons to fight this boss safely.

It is easier to approach if you are coming from the Parliament.

This World Boss can be located at the south of the Parliament in Crown Mines. It's ranged attack can apply a stun effect if it lands, and it's rush attack can deal damage overtime. Try to position yourself on the its sides or behind.

A small World Boss located on the southwest side of Navia Bay. This boss can deploy a shield that is resistant to Ice, so use attacks that are non-ice attribute. Its attacks cover a large area and can be difficult to avoid. You can also use Meryl's Character Trait to counter the Boss' attack effect.

A humanoid World Boss in Rose Garden, south of Crown Mines. Since this area is a hideout, a large number of mobs can continuously spawn around the area. Use weapons that can hit multiple targets like Scythe of the Crow to take on this challenge.

This World Boss can be found in the Northeast side of Warren Snowfield. Compared to other bosses, this boss' attacks are way faster. Be especially careful with its roar attack since it can deal continuous damage. You can try to use long-range attacks when fighting this boss to damage it from a safe distance.