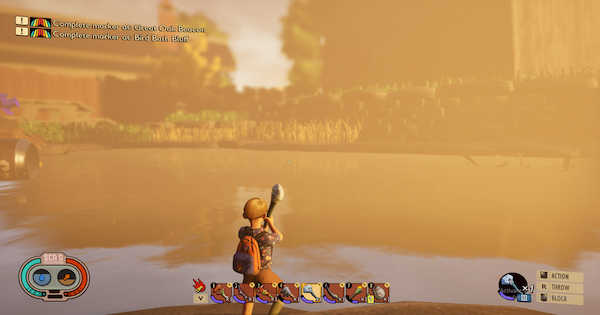 The latest content update for Grounded has released as of 10 am PDT on August 26th. Official patch notes have stated the added content will be limited to the table below:

It's important to note - this content update does not seem to include all of the features found in the game files! This means the content we've outlined below in this article might not be implemented this patch!

Other datamined information from the game files include a lot of water-based gameplay elements, with new underwater insects, as well as new resources that allow you to craft underwater items. Note that these do not appear to have been implemented as of the August 26th patch.

Update Hints Already In The Game?

Actually, it is possible to obtain the Rotten Bee Shoulder Pads item by traveling deep into an anthill and picking it up off the ground. Is this perhaps Obsidian's way of foreshadowing the content of the upcoming update? Try to find this item for yourself now!

The leaks have only included information found in the current game code - so it's not clear exactly when all of this content will actually be released! Since it's in the game files, we can assume it will come out eventually, even if it's not in the current (August 26th) patch.

The follow information is based on leaked previews of the update and is not official.
※ Source: Reddit

The new bugs set to be added in the future seem to be largely divided into two types: Flying and Underwater! This is exciting as it will likely provide more of a challenge to those of us with bases in elevated locations! The addition of more underwater content is also exciting!

The majority of newly added weapons seem to be intended for underwater combat, but there are also Tier 2 versions of the Spear, as well as a totally new melee fist-weapon being introduced!

Two entirely new sets of armor, Bee and Koi, will also be added. The Koi set will no doubt help you out in your underwater exploration! Additional diving related items will also be added to help increase your swim speed.

Check Out The Best Armor In The Game Here

A lot of items with various uses are being added here, including the intriguing Ant Confuser Bomb, which might be useful for making a quick getaway from a packed anthill!

The most exciting thing here is the addition of rugs - this is hopefully the first step on the way to adding even greater housing customization options!

More options to defend your base against insect invaders have been added! Drop loads of painful pebblets on unsuspecting Larva or Ants, or just make them stick to the ground in a sticky honey trap. The Slingshot Turret might also have uses as an anti-air defensive structure?

※ A lot of the information here stems from this Reddit Thread, so check it out for more details + images: Reddit Thread/Youtube Video!!!