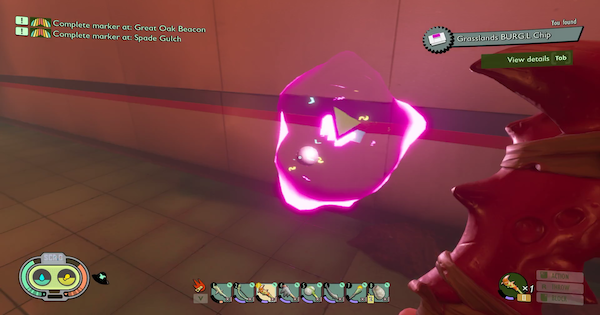 How To Get & Farm Raw Science

Raw Science Points can be found in certain specific locations in the overworld. The majority of these locations are somewhat hidden, like inside labs, deep within caves, hidden in nooks and crannies, and more. You will have to do a bit of searching for these. Consult our list of locations below.

Get Raw Science From Quests

Completing quests for Burgl will also reward you with science. There are five main types of quests:

We recommend doing Hunter & Artificer quests mainly if you are looking to farm up lots of Raw Science fast. For Hunter quests, we recommend abandoning quests to kill weaker enemies and focusing on stronger ones, such as Spiders and Stink Bugs.

Check Where To Find All Burgl Chips Here

Map Of All Science Locations

※ This map is a work in progress, we'll add more locations as we find them!!!

#1 - Left Side Of The Northern Logs

↑ You'll have to approach it from the east.

↑ This one is located just north of the Oak Tree Lab.

↑ This point is far to the east, beyond the lake and below a spiderweb near some rocks.

↑ When approaching this, your vision will be obscured by some rocks at first. Go beyond them to find the orb!

#4 - Southwestern Edge Near The Rake

↑ This Raw Science is found by the Southwestern edge of the map. It will be near the rock with the rake propped onto it.

↑ Look for a small hole on the ground near the rock. Jumping down will cause you to collect the raw science as you fall.

↑ The next Raw Science can be found in the cave with the laser's cable. Head inside and get past the rocks to reveal a new pathway.

↑ Continue following the path until you reach the end. The Raw Science should be at the end of the path just before the dead end.

#6.Cave On The Eastern Part Of Map

↑ This is located in a cave on the Eastern part of the map. It will be by the lighter blots of of land to the right of the laser.

↑ Enter the cave to reach a small lab. The Raw Science will be by the computers for you to collect.

↑ The Anthill entrance can be found on the West side of the map, just West of the Northern laser.

↑ Following the path in the anthill will eventually lead you to the Raw Science inside. It will be in an underwater section of the Anthill, so be ready to get your feet wet.

↑ This Raw Science is found in the same anthill as the Raw Science found in #7. The entrance to it is in the West side of the map, just a short walk from the Northern laser.

↑ Continue following the path and you will eventually end up in a part of the cave with fuzzy red patches. The Raw Science will be sitting there waiting for you.

#9. On The Branches Of The Tree

↑ This is found in the Southeastern part of the map. It will be past the borders of the map.

↑ Climb up onto the tree. The Raw Science will be on one of the branches. Be careful as there will be spiders roaming the area.

#10 Near The Anthill Entrance

↑ This Raw Science is found near the Anthill entrance on the West side of the map. A short walk away from the entrance should bring you to a large rock on the ground.

↑ The Raw Science will be nearby the rock.

↑ A Raw Science can be found under the Oak Tree on the Northen part of the map. Be careful as there will be a bunch of spiders in this area.

↑ There will be a small opening at the base of the tree which you can enter. This place is also home to some spiders.

↑ This Raw Science can be found inside the Oak Lab. There will be two doors inside the lab, one leading to BURGL, and another one. Enter the other door to reach a different room.

↑ Head to the end of the room to find the Raw Science waiting for you.

↑ Another Raw Science can be found inside the Oak Lab. Once you are in the same room with BURGL, follow the path to the right, and the Raw Science should be there.

↑ The Raw Science will be floating on top of the table in the room.

There are many Raw Science orbs that can be found in the backyard, and we're working hard to bring them to you - stay tuned for more content here!

What Is Raw Science?

Raw Science Points are a special currency in Grounded. There are a few ways of obtaining Raw Science, with the most common being finding floating purple orbs in the world. The second way is to complete Burgl Quests and get it as a reward.

Raw Science is a particularly important resource to have because it will be required to unlock more advanced recipes. For example, multi-story base crafting recipes such as the Floor and Stairs will require 1000 Science to unlock!

Unlocking can be done at Burgl, who is found in the Oak Tree Lab.

We have observed Raw Science respawning in a location after around 2-4 in-game weeks worth of time has passed. However, since the addition of Patch 0.2.0, we haven't spotted any respawning Raw Science. It's possible that this is simply an unintended glitch. This makes respawning a rather nebulous issue - please let us know if you've experienced similar problems with Science not respawning.

I found raw 100 raw science on the Tropicop Punch-O Straw when I was ontop of it getting the Puncho-O SCA.B Scheme