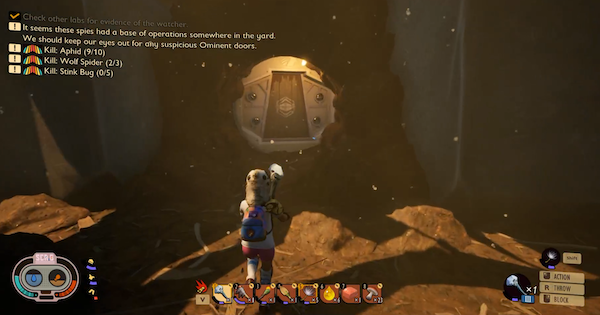 Grounded
Story Explained - Summary & What Will Happen Next?

Here you can find the Grounded game story explained! Read a summary of the plot so far, speculation on what will happen next, guesses about Wendell, Thor, & other characters!!!

What We Know So Far

Although we only have access to about 20% of the story (according to official sources) so far, we have had a substantial enough glimpse into the world of Grounded to be able to tell roughly what direction the game is moving in. Here's a summary of what we known so far:

As you can see, there are plenty of mysteries here to be solved. Let's hope that they'll all be touched on in the relatively near future! In the meantime, we've compiled a lot of speculation on the story for you to read below!

Given that we've already been able to access the other two labs on the map, it's very likely that we'll be able to get into the Haze Lab, which is located in the southwestern part of the map. Who knows what will be inside?

The Haze Lab can be seen in the bottom left of the map, in the area infected with noxious gases. We currently are not able to enter it!

Someone Is Spying On Wendell

As was made clear in the Secret Quest, Wendell does not seem to be alone. Given the size of the note, it's safe to assume that there is another party in the area that was also shrunk down. Will we perhaps confront them in the future and have to take them on? Or will they be our allies?

Check Out The We're Not Alone Secret Quest Here

The Cord In The Tree

In the eastern part of the map, very close to Hedge Lab, we can see a cord all the way up high in the trees. This has a marking labelled "OMN-07 3841-8"... while it's obviously property of Ominent, the role it will play in the future story is unclear.

In one of Wendell's notes, he mentions that he has a son named Thor. Was the mad scientist Tully crazy enough to use the shrinking device on his own son? Might we even encounter him somewhere in the backyard? Perhaps he was the creator of the Whiteboard Potato Drawing?

The possibilities of where the story will go are endless. We do know, however, that the upcoming Water Update will feature a quest that will take players somewhere in the vicinity of the pond to the north. It's possible that there might even be labs underwater for players to dive into.