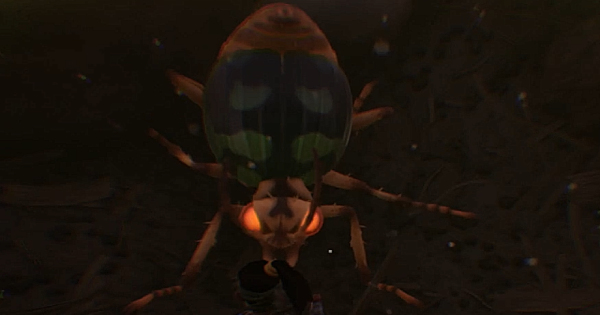 How To Kill A Bombardier Beetle

You will be able to find Bombardier Beetles in the encircled locations on the map. They can be found near the rock and rake on the Southwestern side of the map, and the Northeast edge of the map!

Check Out The Map Guide Here!

The Gas Mask is useful as the locations where you will face the Bombardier Beetle will be full of hazardous haze. Having the gas mask will filter out the haze, allowing you to negate the damage-over-time the haze deals.

Get The Spider Armor

Ideally, you would want to have spider armor equipped on you during this fight. It will give you a huge defense boost, and increase your stamina, allowing you to keep up with the Bombardier Beetle during the fight.

The Insect Axe is a tier 2 Axe that excels in stunning enemies in addition to its good damage and speed. It is a good weapon to have with you when facing off against the large enemy.

Stay Clear Of The Ranged Attack

The Bombardier Beetle will sometimes point its rear end at you and spray a gas. This lingers in the area and deals damage over time. Make sure to steer clear of this by moving to the sides of the beetle to avoid taking hits!

Block During Beetle's Wind Up

The Beetle will try to close the gap between you two. It will then back up to wind up its attack. You will notice its mandibles twitching. Put up your block to negate the beetle's attack. You can also opt to dodge out of the way.

The Bombardier Beetle is susceptible to counterattacks during its attack animations. If you keep moving around the enemy, you will get tons of free hits on the enemy!

The Bombardier Part is an item that drops from the Bombardier Beetle. It seems to always drop from this enemy, and is used in crafting the Tier 2 Axe, Insect Axe.

Check Out The Bombardier Part Here!

Check Out The Boiling Gland Here!

Recipes Bombardier Parts Are Used In

Recipes With Bombardier Part As An Ingredient

Recipes With Boiling Gland As An Ingredient