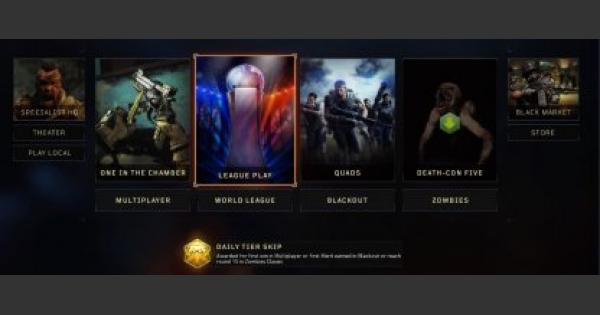 World League Hub Is Now Up On PS4

The World League Hub is now live on the PS4, featuring competitive playlists where you'll compete against players with matching skill level. Earn ladder points by winning matches, but be careful though, as losing matches will make you lose points.

Check Out How To Rank Up in World League!

Play Against Players With Equal Skill

League play is the only mode on Call of Duty: Black Ops 4 utilizing skill-based matchmaking. This way, you're pitted with players of equal skill to you. Rank up the ladders and play against higher-skilled players.

The 1.13 PC update has been released, implementing the changes made earlier on the PS4 and Xbox when Operation Grand Heist launched earlier this week. The changes include numerous weapon, specialists, perks and scorestreak tuning for multiplayer, and Blackout weapon tuning and gameplay improvements. Full patch notes on the Official Treyarch Reddit Page.

The new updated inventory system now shows both weapons simultaneously, making it possible to manage attachments on both weapons at the same time.

Hot Pursuit is a limited time mode arriving on Blackout mode on the PS4 first on February 22. In this mode, 3 new vehicles will be introduced, the SUV, PBR and Muscle Car. Each vehicle has a unique benefit so choose wisely.

An experimental weapon can be found by players under the newest Ghost Town destination in Blackout. Try to be the first player to get this when you jump into Blackout!

Your choice of weapons for Zombies mode has been expanded with the addition of the new Switchblade X9 and Rampage full auto shotgun.

Addressed an issue where players where unable to repair armor from the Quick Equip menu. Also, the SWAT RFT and the Daemon 3XB now appear in the armory for customization for players who did not get them in the last operation. The update also introduces stability improvements.