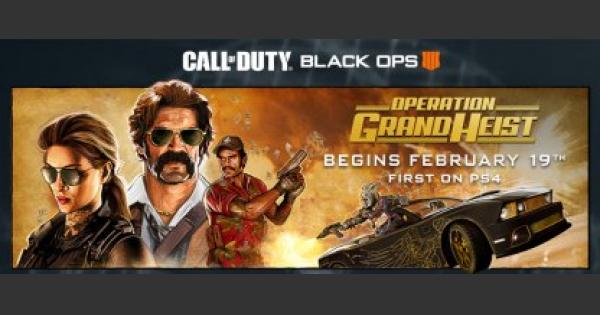 The new season for CoD: BO4 has arrived on the PS4, and now PS4 COd Black Ops 4 players will be able to access the following content:

As with the new season, a new Black Market Contraband stream has been introduced, along with 100 new tiers for players to earn rewards from! These rewards include 3 new Multiplayer Weapons, Blackout Characters, Outfits, and more! The Black Market has also been revamped featuring the return of Blackjack!

Information on this section was taken from the official Treyarch blog post of CoD: BO4.

Fans of COD Black Ops 3's Outrider will be in for a treat as she makes a return in Black Ops 4. Outrider is equipped with the Sparrow specialist weapon, and the Hawk specialist equipment. She's unlocked once players complete the first tier of the Black Market operation.

Pick Off Foes With The Sparrow Weapon

Her Specialist Weapon is the Sparrow, returning from Black Ops 3. The Sparrow is a compound bow with explosive tip arrows.

Her Special Issue Equipment is the Hawk, a drone that can be placed in overwatch positions that can tag enemies, and help you find your targets.

New Multiplayer Mode: One In The Chamber

The classic "One In The Chamber" mode makes a comeback in this update! In this mode, players are given three lives and a pistol with one bullet. Make the perfect shot on your opponent to earn another bullet, and 100 points. A UAV also allows everyone to know the location of other players. The one with the most points will win.

New Weapons To Play With

The new operation also introduces new weapons for players to cause mayhem with in the Multiplayer mode, namely the Switchblade ADS SMG, Rampage full auto shotgun, and the Cha-Ching! melee weapon.

With the new Operation, updates will be made to Blackout mode.

Outlaw Is The Reimagined Standoff Map

Buried Is a Zombies Inspired Location

Below Outlaw is a network of caverns called "Buried", a Zombies inspired location,

New buildings were added for more loot options, adding some fresh new change on how players can tackle the Blackout map.

In Hot Pursuit, is a respawn mode which features three new vehicles, the SUV, Muscle Car and PBR, each having their own unique advantage. For example, the Muscle Car can spot nearby Stashes and Supply drops. While playing in a new police vehicle allows you to spot occupied Muscle Cars.

Rise to the very top of the Blackout ranks with the new Prestige System for Blackout. Similar to Multiplayer mode's Prestige System, players will now be able to Prestige up to 10 times to become a Blackout Prestige Master! Players will earn Prestige icons, calling cards, victory coins & more!

Fight the undead in the Pentagon in the "Death-Con Five" Gauntlet mode! Play as Ultimis versions of Richtofen, Dempsey, Takeo, and Nikolai in 30 rounds of unique challenges. Classified wills also now be available fr purchase as a standalone experience on Feb. 19 on the PS4.

Players can now earn additional tier skip in Zombies by completing Daily Callings in the Zombies Barracks, allowing up to two tier skips per day in Zombies mode.

A new Hellcatraz gauntlet will be introduced later on in the Operation, which take the heroes of the Aether story to 30 new rounds of challenges in "Blood of the Dead". A community-inspired Gauntlet is also in the works to be added later!