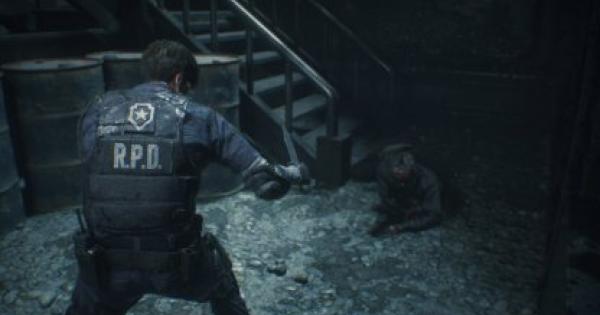 Getting the S+ Rank in Hardcore may the most challenging task in Resident Evil 2. Check out this guide on how to get S+ Rank on Hardcore Mode Scenario A, & how to unlock the Inifnite Rocket Launcher for Leon.

Ivy appearing from here will perform an instant death attack when it grabs you. If you die, you will be returned to the save point, so it will be a waste of time. Always make sure to have a counter such as a knife or kill them with the Flamethrower.

Check Out How To Deal With and Defeat Ivy Here!

Unlike Claire, Leon's playthrough can not be easily done due to the lack of grenade launcher. It's important to avoid as much damage as possible, and bring recovery items. Emergency Spray is also available in the area where you fight G, so pick it up as well.

Aim For The Eyes in The Knee When Fight Starts

When the battle begins, aim for the small eyes attached to the knees with sub machine gun. It will be a great opportunity because it is hard to target while you are on the move.

Shoot With Magnum When Chest Opens

Attack the eyeballs on the chest with a Magnum when it opens. You can deal great damage by shooting into the eyeballs in the chest which is a weak point. Aim well before firing to avoid wasting bullets.

When damage is given to G3 more than a certain amount, the behavior pattern changes, and the eyeballs of weak points are always exposed. While keeping the distance, you can defeat it by shooting eyeballs.

Damage It With the Flamethrower

When G exposes all its eyeballs in the 2nd half of the fight, use the Flamethrower to damage them all at the same time. Make sure to save some fuel for the final boss.

4. Manage Your Inventory Before the Fight

In the last item box, items can not be replaced until the end. Take only necessary items such as Frag Grenade for Super Tyrant. Bring also recovery items with you.

Save 2 Item Slots for Rocket Launcher and Spark Plug

Check Out How to Unlock Infinite Rocket Launcher ATM-4

The fragment grenade is powerful also for the Super Tyrant. It is recommended because it is easy to use when the Tyrant stops after a rush attack.

If you have leftover flashbangs, you can instantly stop Tyrant's instant death. This also makes Tyrant vulnerable for a short while so shoot at the heart.

Use the Flamethrower to Beat the Tyrant

The Flamethrower can also deal a good amount of damage to Super Tyrant. Use the rocks to distance yourself from the Tyrant while using the Flamethrower.

You Can Stop The Timer by Pausing The Game

S+ Rank must be completed under a strict time limit. You want to take the least number of actions to complete tasks as possible so as not to waste time. Pausing the game (Option Button for PS4, Start for Xbox One) will stop the timer. This gives you time to review solutions for puzzles before doing them.

In Hardcore mode, if you get attacked twice, it's game over. Try to defeat enemies in frequently used pathways carefully and take time to defeat them.

Pick Up All Ammunition Items

Since ammo is scarce in Hardcore mode, you must have ammunition or gunpowder at all times. When inventory space is insufficient, prioritize ammunition and discard other items.

Quit and Load Save File When Game Is Over

If you die during the game, it's best to just load a save file instead of continuing. Continuing from where you left off adds time to your total playtime.

Use of Infinite Knife Is Allowed for S+ Rank Clear

Although the use of Infinite Guns is not allowed for getting S+ Rank, you can still get an S+ Rank when using the Infinite Combat Knife. This helps easily kill downed zombies and to conserve bullets.

Check out How to Unlock Infinite Combat Knife Here!

In order to clear S+, you need to keep the number of saves to maximum of 3 times. The recommended points above are before major boss fights with G and instant death situations.

Check Out How To Get The S & S+ Rank - Requirements & Rewards Here!