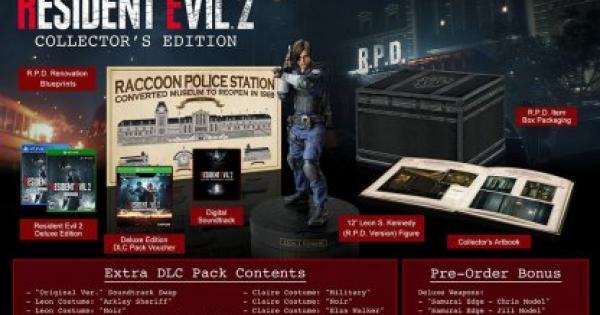 Resident Evil 2 Remake | RE2
Which Edition Should I Get?

Know everything to know about the available Resident Evil 2 editions and packages; including their content and version differences, DLC and feature inclusions, & prices!

Which Edition of Resident Evil 2 Should I Get?

All in all, there are 3 editions available for Resident Evil 2 that players can choose from. Each one differs in content, so check out this guide to see your options!

Standard Edition for those New to the Franchise

Players who are just starting out on the Resident Evil franchise are recommended to try out the Standard Edition. The standard edition comes with the base game, and signature weapons of other characters from the franchise.

Consider the Deluxe Edition For a Unique Noir-esque Experience

Looking to dive deeper into the game and customize your experience? Then you may want to check out the Deluxe Edition. It comes with five additional costumes for Leon and Claire, and adds an option to play the game using the music and SFX of the original PS1 classic RE2.

The Collector's Edition is a must for any hardcore fan of the franchise. It comes with a Leon Kennedy 295mm tall figure, a curated artbook, a special soundtrack, a replica of the renovation plans of Raccoon City Police Station, and both costume and gun DLCs found in the Deluxe Edition.

The Standard Edition is as simple as it gets. Relive the Resident Evil 2 experience, now completely remade for the latest generation systems.

Pre-ordering the game will give you access to the Samurai Edge Deluxe Weapons, pistols wielded by characters Jill Valentine, and Chris Redfield in earlier games.

The Deluxe Edition comes with the full game, plus 5 unique costumes for both playable characters Leon and Claire. The Noir costumes in the pack also allow you to play the game in a noir-esque black and white filter.

Play With the Original RE2 Sountrack and SFX

Relive the classic RE2 experience and turn on the original music and SFX of the PS1 classic in this edition of the game!

As with the Standard Edition, this edition also comes with the Samurai Edge Deluxe Weapon DLC for those who pre-order the game.

Like the Standard Edition, the game is also available as a digital download on PS Store, Xbox Games Store, and Steam, and carries the same bonus content for both PS4 and Steam.

Modeled after the actual in-game 3D asset for Leon S. Kennedy, the collector's edition contains a finely detailed 295mm tall model of Leon. A must for any hardcore Resident Evil collector!

A 32-page artbook containing art from the game, curated by in-game jounrnalist Ben Bertolluci, chronicling the events of the Raccoon City incident.

Listen to the Special Soundtrack

Contains 25 tracks, including tracks made specifically for the remake, and arrangements of music from the classic Resident Evil 2 game.

A B2-size, double sided plan replica of the Raccoon City Police Department, showing how it converted the city's museum to the iconic police station.

It also comes complete with the base game, and all the content from the deluxe edition, including costumes, and other featured options.

Check out All Costumes Here!

As with the Standard and Deluxe Editions, this edition also comes with the Samurai Edge Deluxe Weapon DLC for pre-orders.