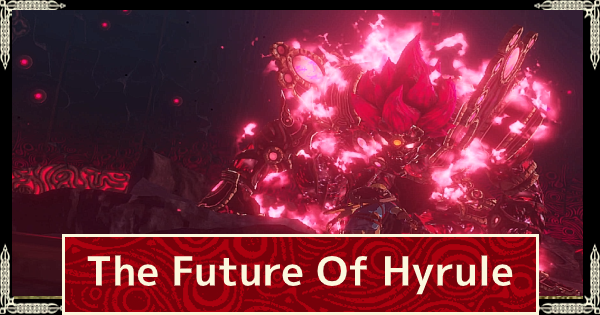 The Future Of Hyrule - Level & Characters

Upon finishing Chapter 6, this quest will be unlocked. It's one of the three stages found in Chapter 7.

Check Out The Chapter 7 Walkthrough

The Future Of Hyrule - Battlefield-Specific Materials

The Future Of Hyrule - Walkthrough Guide

Same As How You Fought Them Before

The Blight Ganons will reappear in this mission, requiring you to defeat them all over again. They have the same movesets as they did in the Water And Fire & Air And Lightning missions.

Can Be Done In Any Order

You don't have to worry about the order in which you will fight the Blight Ganons. They can be done in any order and it won't affect the outcome.

Unlike before though where each had their own arens, these Blight Ganons are limited to the castle. Some like the Waterblight Ganon are fought in a relatively smaller area.

Be Careful When Fighting The Fireblight Ganon

There's a Malice Guardian a few steps away from where you fight the Fireblight Ganon. Better to distance from yourself from it or it might just strike you with its laser.

Dodge Back From Miasma Spike Attack

When the Harbringer Ganon launches in the air, start dodging backwards. This is the windup it does when launching its multiple miasma spikes attack.

Get Behind Harbringer Ganon During Cross Cut Attack

Has The Same Movesets

Astor will be the same as when you fought him in the Freeing Korok Forest mission. There isn't any difference in his skills and attacks.

Cannot Damage It With Its Shield

Until a cutscene plays during the fight, don't expect to deal even a bit of damage on Calamity Ganon. During the first part, you won't be able to even scratch it.

The Calamity Ganon's stomp has a small radius so it's not as simple to escape. Dodge to the side of his unraised leg to get away from it.

Get Out Of Circle

When the Calamity Ganon jumps high up in the air, watch out for the circle on the ground as it will indicate the radius of its attack. Immediately get away from it.

Escaping from Calamity Ganon's charge attack is as easy as simply dodging to the side.