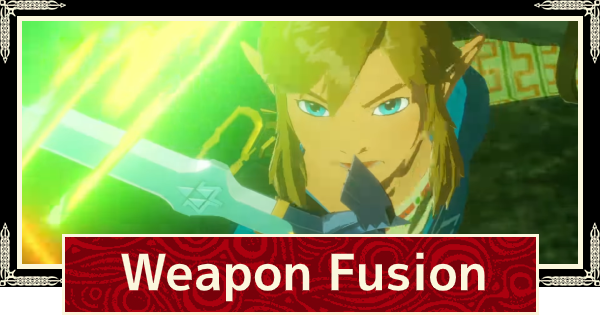 Read this Hyrule Warriors Age of Calamity (Switch) guide to learn more about how to fuse weapons! Find out how to upgrade weapon levels, weapon fusion, blacksmith, & remove seals!

Blacksmith Guide - Where To Upgrade Weapons

Fusing is the main way to power up your weapons in Age of Calamity. It will cost you some rupees and will also use other existing weapons as consumable materials.

Upgrade Weapons At The Blacksmith

In order to upgrade your weapons, you'll have to first unlock the blacksmith. His shop can be opened up by completing a very simple material turn-in Quest. To access it, check your map in Central Hyrule, to the east of Hyrule Castle.

Check Out Other Unlockable Services Here

Initially, you'll only be able to carry a maximum of 20 weapons per character. This means that you will eventually run out of space and be forced to sell weapons at the end of a stage. This is not ideal, so we strongly recommend going to the Blacksmith after every mission and upgrading your weapons!

By finding Koroks hidden across stages in the game, you can do a quest to increase the amount of weapons you can hold in your inventory! This is a hugely convenient upgrade, so we recommend not shirking in your korok-finding duties!

By using an existing weapon and fusing it with another one, you can strengthen your weapons, providing them with bonus stats! Doing so means you will destroy one weapon entirely, so choose which weapons you fuse carefully.

↑ When you carry out a fusion, you'll see the stats that are going to be added to your weapon on the confirmation screen.

Weapons will have a variety of secondary stats, known as Seals, available on them. The secondary stats a weapon has are random, but it is possible to add additional secondary stats on a weapon via fusion. Seals will also have a specific shape to them as well!

▼Jump below to see a full list of Seals

If you match the shape of two seals when fusing weapons, you can boost the stats on your weapon! This is something you should always aim to do, so don't sell weapons that have a desirable seal shape!

↑ If you've successfully matched a seal, you'll see a slight glowing aura around it!

New seals are added onto weapons at 5 level intervals. Importantly, seals are only added at these milestone levels! This means that you should save up weapons with an ideal seal until you're able to reach a level with a multiple of 5 by fusing them!

First Fusion Grants Seal If Weapon Has None

Note, if your weapon has NO seal on it, it will gain one on its first fusion (provided the other fused weapon has a seal). This is an exception to the 5/10/15/20 rule.

Seal Of The First Selected Weapon Is Passed On

It is important to emphasize: Only the seal of the first weapon you choose to fuse will be added to your main weapon! This means that if you choose to smelt 5 weapons at once, you have to be careful which one you pick first! The effects of the other weapons will be lost.

When you've selected a weapon to buff up, you'll choose from a list of all your currently owned weapons to use as fodder. You can check the fodder weapon's Seal ability by pressing the R-Stick before proceeding, so always double check you're fusing the right weapons.

How To Remove Weapon Seals

How To Unlock Seal Removal Ability

To unlock the ability to remove seals, you need to clear the quest Secret of the Rito Artisans. To unlock this quest, follow the procedure below.

How To Unlock The Quest: Secret of the Rito Artisans

How To Remove Seals

Which Seals Are Best?

In general, we feel that the seal that's best will depend on the character you're playing. That being said, we'd like to showcase 6 different seals we feel are useful in almost every situation possible in the game.

We feel the above 6 seals are going to be strong in almost any situation for a wide variety of characters, though they do lean a little bit toward Link and Zelda. Other ones tend to be more niche, and might be useful for certain character specs. Ultimately, the decision which seal to use will be made on a case-by-case basis.

Where To Get Weapons

You can get weapons from the chests dropped by powerful foes (large monsters). Inside of this chest, you'll find either a weapon or a material.

Check Out Materials List & How To Get From Here

On rare occasions, powerful foes can drop white chests. Inside these you can find weapons with an orange-tinted name. These orange weapons have slightly better stats and are guarantee to have a seal!

Skull Chests are predetermined spawns on a map and have a chance of also dropping orange weapons!

Is There Weapon Rarity?

As far as we've been able to confirm in the Demo so far, there doesn't appear to be weapon rarity in the game. It's possible that because we only have access to the early game, we simply can't reach higher level items. For the time being, the only way to improve your weapon is to level it up. The maximum level for each weapon seems to be 20.

i did those directions twice now and rito artisan quest did not unlock, is there more requirements? i got to chapter 4or 5 and it still didnt unlock.

I followed the directions for unlocking the Rito Artisan quest and unfortunately the quest failed to unlock. I have fought the story battle as well as the mentioned Rito challenge, and I think the only quest that unlocked from that challenge was Cross the Hebra Mountains.

Regarding weapon fusion - if you depress the "R" stick, you can cycle back and forth between the fusion result and the highlighted weapon to be fused. This way, you can see the buff as well as the % for each weapon without having to make a list.

Silly character limit... See image for useful details for those grinding to max the demo. 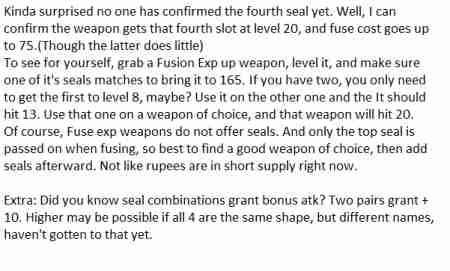