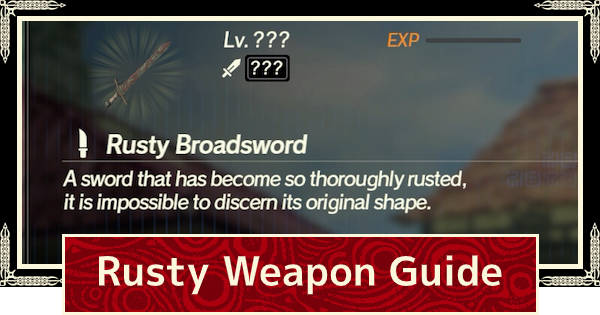 Check out how to get and de-rust rusty weapons in Hyrule Warriors: Age of Calamity (Switch). Learn how to unlock Blacksmith's Octo-Polish, how to fix rusted weapon, & more.

What's Rusty Weapon & How To Get

A Weapon That Needs To Be Polished

As you explore the battlefield, you may encounter a rusted weapons. These weapons need to be de-rusted by the Blacksmith. Blacksmith learns how to de-rust (Octo-Polish) your weapons after you've completed the quest called From Rusty to Trusty.

The result of polishing rusty weapon (Which weapon you'll get, stat, seal) is determined randomly but we've confirmed that you have a chance to get higher stats with better seal. You might also get a weapon with ++ seal if you are lucky.

How To Get Rusty Weapon

The Rusty weapons drop randomly from chests and enemy. We're still investigating whether the strengths of the dropped weapon increase as the stage difficulty (recommended level) increases but it's likely that Rusty Weapons dropped in higher difficulty stages (ex. Blood Moon stages) tend to have higher stats.

How To Unlock & De-Rust Weapon

How To Unlock Ability To De-Rust Weapon

To unlock the ability to de-rust your weapon, you'll need to clear the quest From Rusty to Trusty and unlock Octo-Polish. Follow the steps below to do so.

In order to turn your Rusty Weapon into usable new weapon, you'd have to give required materials and pay 250 rupees to the Blacksmith. Which weapon you'll get, the stat and seal is determined randomly.

Will Materials You Submit Make Difference?