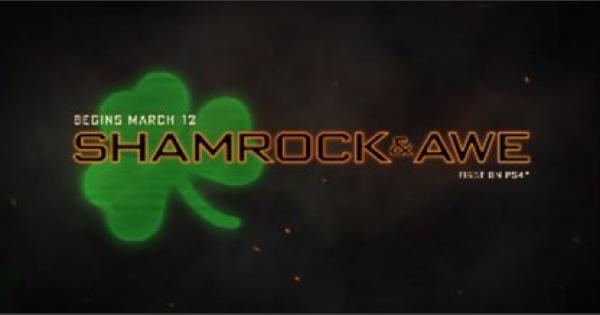 As with previous Call of Duty titles, Shamrock & Awe is an in-game celebration of St. Patrick's Day, which will feature Irish themed cosmetic items, and emotes.

Claim Your Free Gesture & Calling Card At The Black Market

Check Out The Black Market Here!

This week in #BlackOps4:

As with major event updates for Black Ops 4, updates will be released first on the PS4. Other platforms will receive the update a week later.

The update will be available for players worldwide on March 12, 2019, at 10AM PT. Below is a time conversion table to check out the start times in other time zones.

The new update also fixes issues in the game, and introduced gameplay improvements. For example, players can now choose a Class when joining a multiplayer match in progress. You can check out the official patch notes here.

Stockpile mode is a re-imagining of Black Ops 3's Fracture mode. In this mode, you need to deliver enemy tags to the deposit site to win the game!

A variant of Stockpile, carry enemy shamrocks to nearest pot of gold to score points for your team.

A variation of the map Contraband, where a tropical storm has hit the island.

World League has also been improved to address quitters and to make it feel more rewarding for players.

Mentioned also in the tweet is that there will be improvements made to League Play.

Check Out How To Rank Up In World League Mode Here!

As with the turn of the season, the Blackout map will refresh its look and will reflect a spring-themed environment.

A long time staple mode for Multiplayer, Hardcore mode will soon arrive for Blackout! Play Blackout with no HUD, armor, vehicles and zombies! Use your best Blackout strategies to emerge victorious!

These vehicles are now available in Solos, Duos, and Quads without their special abilities found in Hot Pursuit.

A St. Patrick's Day themed map is implemented, plus additional loot will be available in Pot-o-Gold Stashes, Homunculus Leprechauns hoards, and in Mystery Boxes at the end of the rainbow.

In Hellcatraz Gauntlet, fight through 30 rounds of challenges as the Primis crew on Blood of the Dead in "Hellcatraz".