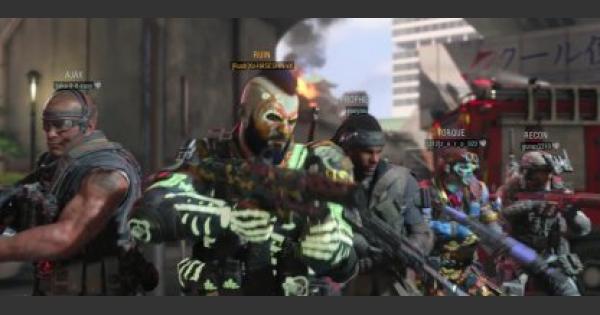 Learn about the significant changes made in the Ver 1.07.1 update and notes released last Nov. 27! This includes the release of the new Safeguard Playlist & the Bowie Knife!

Check Out the Multiplayer Guide & Tips

Release of Safeguard Playlist for the PS4

Work together to secure your charge in this new Escort Mission, Safeguard. To win the game, teams must bring their robot charge into enemy territories while also preventing the other team from completing the mission.

The Hardcore Mercenary Moshpit has been released exclusively to the PC & Xbox One! The 5v5 Domination playlist does not allow parties so bring your A-Game!

The Featured category will include the Hardcore Nuketown, Chaos Hardpoint, and Mercenary Objective Moshpit for this update.

Seaside Sunset and Firing Range Night have been added to all available playlists. Various bugs and issue resolutions have also been implemented for Nuketown and Summit.

The Bowie Knife can now be looted in Equipment Stashes, defeated Zombies, and as a random item spawn in Zombies-themed maps across all platforms.

There are new Zombies Origins Character Missions for Dempsey, Nikolai, Takeo, and Richtofen to be completed. However, the missions are currently only available for PS4 players.

The Brightfather Event has been released in all playlists for the PS4 with Brightfather's health lowered for Solo and Duo Playlists.

Various bug fixes and issue resolutions have been implemented for Zombies to support smoother gameplay and the overall stability of the game mode.

The Script for the Torque Tutorial Mission has been tweaked to perform better.

The Multiplayer and Blackout After Action Report can now be checked from the Tier Rewards menu and will display all earned Tier Rewards of players.