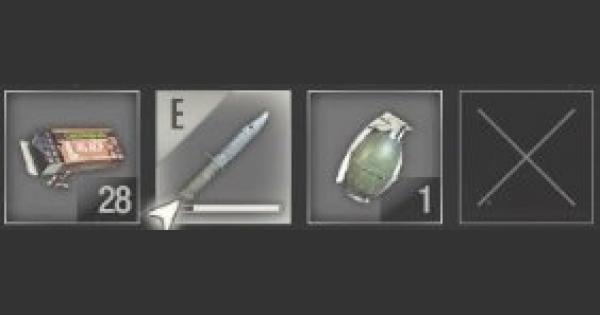 Learn everything to know about the Combat Knife in Resident Evil 2! This includes on how to acquire it, its uses, different types, and more in this guide!

Strike at enemies with your trusty Combat Knife. As a melee weapon, its damage is abysmal compared to guns and its range is limited to close-range combat. Its main perk is that it doesn't need ammo to use!

Knife Deteriorates with Use

The Combat Knife deteriorates over time, limiting its use. You won't be able to keep swiping at enemies with it so just like with guns, you'll need to be thrifty with its use.

The Combat Knife is the standard melee weapon you'll find in the game. Once it fully deteriorates, it cannot be used anymore.

First Combat Knife Given by Marvin

You will get your first Combat Knife from Marvin once you meet him in the Police Department. This is a scripted event that happened in all storylines.

Check Out the Story Guide & Walkthrough

How to Get the Combat Knife

There are multiple Combat Knives you can find in the game. It's part of the Random Loot so don't expect to find it in the same places across different playthroughs.

The Infinite Combat Knife is one of the secret weapons in the game. Players will have to work across multiple playthroughs to be to complete its objective and be able to get it.

How to Get the Infinite Combat Knife

To get the Infinite Combat Knife, you'll need to find and destroy all 15 Mr. Raccoon Figurines. These figurines are scattered across the map, requiring you to hunt them down across a playthrough.

Use as Finisher Against Zombies

Save on ammo by using the Combat Knife to finish off an almost-dead zombie. This is ideal when battling against enemies one-vs-one.

The Combat Knife is one of the many weapons you can use to counter an enemy's grab attack. Doing this will free you from their grab and inflict damage on them.

Countering will save you from taking on damage! Instead of being damaged by enemies, you'll be the one damaging them instead.

Stays Lodged at Zombies when You Counter

Works on All Types of Enemies

Countering with the knife works on almost all types of enemies from the game. You can counter zombies, G Spawns, and even the Tyrant with the Combat Knife.

Cannot Counter Attacks from Behind

Even with a Combat Knife, you won't be able to counter enemies who have grabbed you from behind. Make sure to always keep an eye on all sides to ensure you don't get sneaked on by enemies.

The Combat Knife can be a last resort weapon when you run of ammo and your guns are rendered useless. It can help fend of enemies as you try to search for ammo.