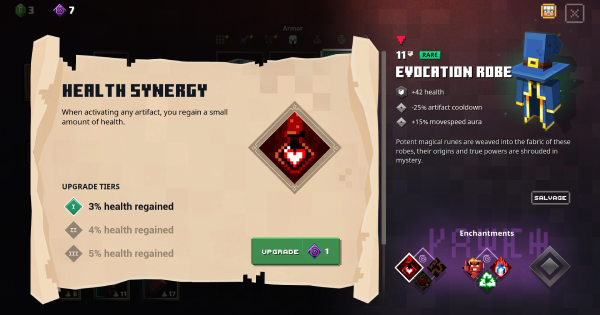 New Best Enchantments are expected to be added with the release of the Jungle Awakens DLC on July 1, 2020. We expect a change in the game's meta with the new items coming in!

Leeching is an extremely useful enchantment that heals a percentage of your health when you defeat an enemy. This is good for higher difficulty levels when survival is important.

Check Out The Leeching Enchantment

When your weapon is enchanted with Poison Cloud, it can create small areas of poisonous gas, dealing area-of-effect damage to enemies in the area.

Fire Aspect gives your weapon the ability to set enemies on fire. Doing so will do damage over time, allowing you to blaze through foes fast and efficiently.

Burning will create a circle of fire around you that can flinch enemies away. This prevents them from getting into melee range with full health.

Cool Down shortens the amount of time needed between artifact uses. This is extremely helpful when surrounded by mobs in higher difficulty levels.

When your armor is enchanted with Health Synergy, you regain a percentage of health every time you use an artifact. This is useful for sustainability in more difficult dungeons within the game.

This Enchantment will imbue your weapon with a passive ability that heals players whenever they attack an enemy. This is great for both offensive and defensive purposes.

Check Out The Radiance Enchantment

Pair this up with other Artifiacts with stun and you'll be able to stun lock enemies whenever you engage them. Although since bosses are immune to stun, it's not recommended there.

Check Out The Stunning Enchantment

Let lightning come down on your enemies with the Thundering Enchantment. It has a high enough chance of triggering even without the upgrades.

Check Out The Thundering Enchantment

This enchantment gives you the ability to deal critical hits for triple the damage. Higher upgrades increases the chance of applying the buff.

Check Out The Critical Hit Enchantment

Piercing puts more power in your shots whenever it triggers since it can then hit multiple enemies. This is great for both Crowd Control & Bosses.

Check Out The Piercing Enchantment

Shoot and arrow and you might just find it setting off a massive high damage chain reaction! Upon impact, arrows shot from your bow will have a chance to release another 5 arrows.

Check Out The Chain Reaction Enchantment

With the Tempo Swift, you'll be able to shoot arrows from a longer distance. No need for short-range bow or crossbow attacks.

The Super Charge increase the damage your arrows will do during Charged Shots. Because of the conditions of this Enchantment, it's not quite as viable against multiple enemies.

Check Out The Swirling Enchantment

SImilar to the Swirling Enchantment, Shockwave will add an additional move to damage enemies at the end of your attacks. The Shockwave in particular is great for finisher weapons like Hammers.

Check Out The Shockwave Enchantment

This is an extremely helpful enchantment when in area with lots or ranged enemies. The deflect is bound to trigger every few arrows shot at you.

Additional defense is always good and Protection will give that to you.

Cool Down shortens the amount of time needed between artifact uses. This is extremely helpful when surrounded by mobs in higher difficulty levels.

Swiftfooted is great for either closing the distance between you and an enemy. It's also good for disengaging from enemies and taking a breather to heal.