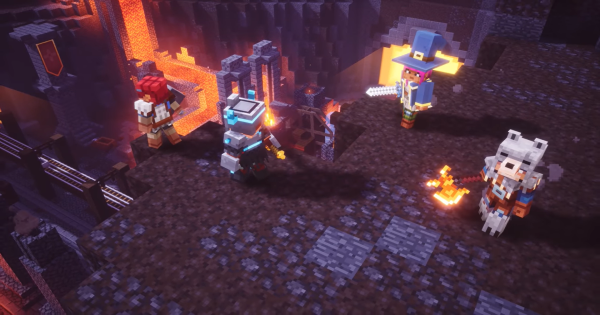 The 2nd DLC for Minecraft Dungeons, Creeping Winter, has been released on September 8, 2020. It comes with new missions, monsters, and winter-themed loot!

The DLC will be set in the snowy peaks of a mountain! This biome will feature new terrain that will have you slipping and sliding on icy surfaces, and freezing yourself solid should you fall into the cold waters!

The Creeping Winter DLC will feature new mobs and enemies for you to encounter in the new snowy biome of the game. Included in the DLC are the new Iceologer and Icy Creeper.

The Iceologer is a new enemy that you will face in the DLC. This enemy has the ability to create floating blocks on ice that will follow and drop on you wherever you are! It's an enemy that can be a threat at any range!

The Icy Creeper seems to be like any other regular Creeper, but will have some unique traits that separate it from the original enemy. It will be surrounded by icy particles, and has a different explosion!

The Creeping Winter DLC also brings with it new types of Merchants that can be found in your base camp! Among these new merchants are the Gift Wrapper, the Luxury Merchant, as well as a Mystery Merchant!

A new feature comes to the Blacksmith vendor! Visiting this merchant will now allow you to upgrade your different equipment! Upgrading will allow you to reroll an item's power level based on your current recommended level!

Check Out How To Upgrade Items Here!

Check back soon to learn more about the Creeping Winter DLC! This article will be updated with more information as soon as it is confirmed!

The 2nd DLC, Creeping Winter, will be released on September 8, 2020. This also includes free content such as Daily Trials, new items such as the Gift Wrapper, & physical editions of the game.

The release date of the second DLC, Creeping Winter, is also on Sept. 8, 2020. This will bring in new missions, dungeons, enemies, and more!

New content such as free daily trials and a new item called the Gift Wrapper will also be introduced in the September update.

In a recent update Minecraft has unveiled the two upcoming DLCs for the game. The first of the two DLCs is Jungle Awakens. Travel through the forests & battle with enemies to stop a new evil force! Jungle Awakens was released on July 1, 2020.

Minecraft Dungeons has officially launched and is available for PC, PS4, Xbox One, and Switch! Get your copy and start exploring the different dungeons to gain loot & stop the Arch-Illager!

Check Out The Beginner's Guide Here!

Minecraft Dungeons will release for all platforms on May 26, 2020. Players can select between 2 editions when pre-ordering the game for their platforms.

The table above shows each edition of the game, along with the bonuses that come with each. Use it as a reference for when you plan to buy the game.

Pre-Order Not Available for PS4

Minecraft Dungeons is currently unavailable in the PS Store. This means that there is no pre-order for the game for the PS4.

Check Out How To Buy For PS4 Here

A randomly selected group of players that signed up on Minecraft's Official Site were able to enjoy a closed beta of Minecraft Dungeons. Contents in the beta included a sample of the first few levels of the game.

Unfortunately, players who participate in the beta will not be able to carry over items and progression that they've earned from the beta to the full game.

Back to Top Page
ユーザー登録のご案内