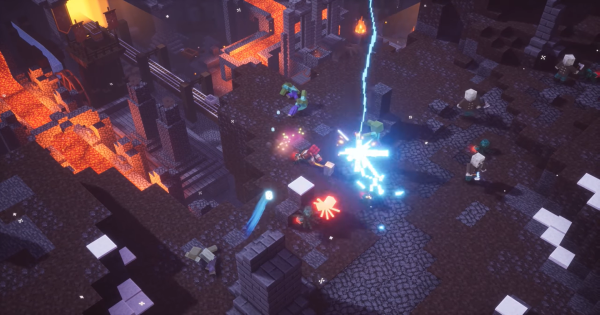 New Enchantments are expected to be added with the release of the Jungle Awakens DLC on July 1, 2020. Travel through the forests & battle with enemies to stop a new evil force!

The list below will be updated once we've confirmed more weapon enchantments when Minecraft Dungeons has launched!

The list below will be updated once we've confirmed more armor enchantments when Minecraft Dungeons has launched!

How To Get Enchantments

Enchantments are items that you equip to your character in order to add or alter abilities! These can include increased damage, health regeneration, and even weakening enemies!

Can Be Equipped From Inventory

Some Enchantments Are Not Compatible With Equipment

Take note that some enchantments will only be compatible with certain weapons. For example, you will not be able to equip an Exploding Arrows enchantment and expect arrows to come out of your hammer.

Can Be Upgraded With Enchantment Points

Enchantments can be upgraded through the use of Enchantment Points. These are gathered by leveling up or salvaging already enchanted equipment.

Check Out How To Get Enchantment Points!

Minecraft Dungeons's first DLC "Jungle Awakens" is set to release in July 2020. With it comes all new contents, including all new missions, enemies, and more!

What was officially stated by the devs was that new biomes, weapons, armors, and enemies will be appearing in the DLC. Click on the articles below to find out about the already existing contents in the game!