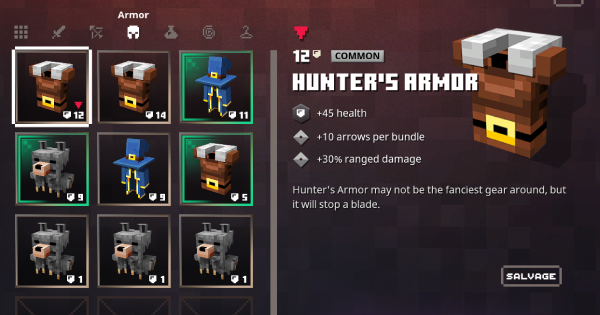 Read this Minecraft Dungeons guide on the best armor tier list in the game. Including best early game armor and best endgame armor to use & best Jungle Awakens DLC armor!

New Best Armor are expected to be added with the release of the Jungle Awakens DLC on July 1, 2020. We expect a change in the game's meta with the new items coming in!

Get Unique Armors For Endgame

Unique armors have special abilities and effects, making them specifically different from other rarities. For endgame, it will be better to get them for your builds.

All Unique Armors - How To Get

Hunter's Armor can be found in Creeper Woods. It boosts ranged damage & increases arrows per bundle, making it great for ranged attackers.

Mercenary Armor is extremely useful as it reduces damage incurred from enemy attacks. It also boosts your weapon damage to help finish enemies off fast.

The Reinforced Mail armor is useful defensive equipment thanks to it being able to negate incoming damage. However, keep in mind that this will also lower the cooldown rate of your roll. Best paired with the Deflect enchantment for ranged attacks.

Check Out The Reinforced Mail Details!

Just like Reinforced Mail, this armor will reduce damage taken, and even negate some attacks. Best paired with the Deflect enchantment to negate ranged attacks!

You can also find Wolf Armor in Creeper Woods. It gives a weapon damage boost aura & is great in multiplayer mode, as it heals allies when you consume a potion.

Since Long-Range attacks are vital in defeating mobs and tough enemies, having an armor that boosts range damage is amazing. This is even better if your build primarily deals with long-range damage.

Frost Bite is great in dealing with mobs since it has the ability to stun mobs around it. Although it's not quite as viable when fighting against bosses.

Fox Armor has a 30% hit negation making it easier to survive in battles. This is even better with a deflect enchantment.

The Cave Crawler armor summons a bat to fight alongside of you. It's great to use with the Golem Kit, Love Medallion, and Tasty Bone for a summoner / pet build.

For players who use soul-consuming artifacts such as the Corrupted Beacon, Harvester, and Lightning Rod, the Souldancer Robe is great armor for a soul-collecting build.