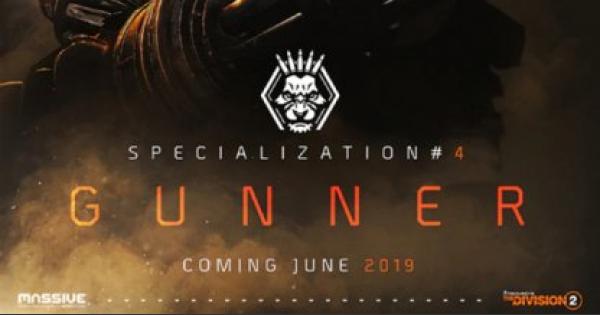 Check out the details summary for Tom Clancy's The Division 2's Title Update 4, which introduces the new Gunner Specialization! Find out more info about its features, patch note summary, changes, and more!

Wield a Powerful Minigun To Lay Waste On Enemies

The new specialization comes with the Minigun Signature Weapon. Lay waste with sustained high damage, however, when the Minigun is drawn, the Gunner cannot cover, vault or roll.

Pin Enemies In Place With the Riot Foam Grenade

The Gunner is equipped with the Riot Foam grenade which pins enemies in place, perfect for going all out with your minigun.

Knock Enemies Out Of Cover With Banshee Pulse Skill Mod

The Gunner comes with a signature skill mod for the Pulse, called "Banshee", which knocks enemies out of cover and causes them to be briefly confused.

As with other specializations, the Gunner has a P320 XCompact Sidearm.

Owners of the Year 1 Pass will instantly unlock the Gunner, however, they can still complete the Special Field Research. They will instead receive exclusive cosmetic rewards.

Clan Weekly Projects have been made easier to complete for smaller clans, and reduced CXP requirements for the Clan Cache tiers. The update also introduced various quality of life fixes for Clan management.

Projects will no longer require donations with specific talents & replica items, while increasing rewards for most projects. Some projects will now also require World Tier 5 access.

Any specialization can now pick any weapon to spec into. This means you're no longer stuck with just Rifle improvements using Sharpshooter and the like. New buffs and nerfs are also incorporated in the new update.

NPC Backpacks will no longer block incoming damage, and various behaviors for certain NPC actions have been fixed.

The Reviver Hive, Assault Drone and Firefly Skill Platforms have all been improved.

Numerous bugs have been fixed in this Title Update. For a full list of bug fixes and improvements, you may check out the official Ubisoft Forums for the full patch notes here!