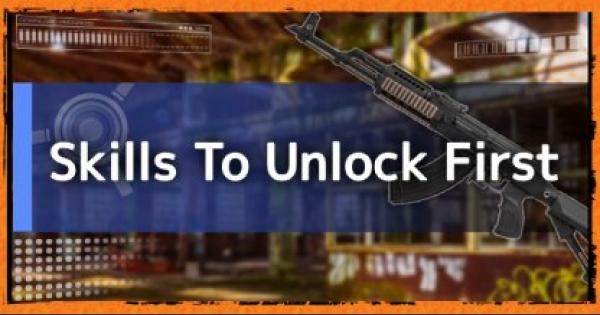 Check out this Tom Clancy's The Division 2 guide on which skills to prioritize and unlock first when starting in the game. Including tips, techniques, and more!

Assault Turrets are one of the best skills to unlock at the beginning of the game. This gives you an extra hand in defeating crowds of enemies & can distract foes away from your location.

Though less durable than the Assault Turret, the Striker Drone is another skill that is useful in the early game. It can be manually set to target a specific enemy or to go ham with its continuous fire on nearest targets.

The Fixer Drone is able to repair your own or an ally's armor, making it a viable early unlock option in both solo or multiplayer mode. It's best to deploy at the start of the battle when you're most likely to suffer from a rain of enemy bullets.

The Reinforcer Chem Launcher releases a gas that repairs armor. It has a smaller range than the drone but it has a shorter cooldown so it's easy to use even when moving around in a small, enclosed space.

The Restorer Hive sends out micro drones that repairs missing armor. The cooldown is far longer than the Fixer Drone but it can do several repairs in one deployment.

What Are Skills In Division 2?

Techniques That Assist In Battle

Skills are techniques utilized in combat that will help lead to victory against the enemy. There are different skills that focus on offensive, defensive, support, and recovery effects during combat.

To first unlock a skill, you need to use up 1 Skill Unlock token. Then, if you need to unlock a variant of that skill, SHD Tech is required. Be careful in choosing which skills & variants to unlock as these require SHD Tech which come in limited amounts.

Check Out Where To Get SHD Tech!