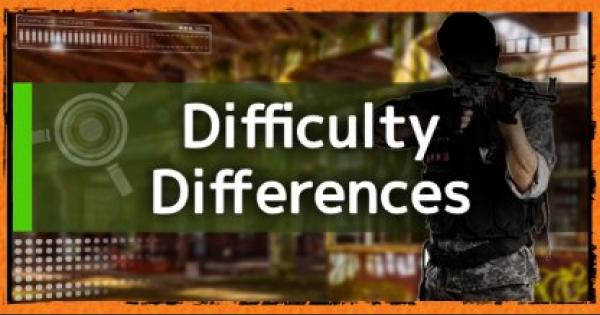 Find out the differences between difficulty levels in Tom Clancy's Division 2 in this guide. This includes the changes to the enemies and the rewards, & how to change Mission-based and World-tier difficulty.

Check Out the Main Mission Walkthrough

Missions are Set to Story Difficulty at First Playthrough

Mission difficulty cannot be changed for missions which you have not completed yet. At your first playthrough, they can only be played at Story difficulty.

In Hard Difficulty, you will be met with tougher enemies as Veteran and Elite enemies will be added to the enemies you have to face per mission. They'll be stronger compared to Story or Normal mode so be sure to be ready for them.

Upon reaching World Tier 4, you'll be able to play any mission in Challenge difficulty. These missions are tough, but conquering it will net you even greater rewards, as well as Specialization points.

Take on the challenge of beating a mission on Hard or Challenge Difficulty and you will be rewarded with additional Target Intel and other items! You'll also get higher XP for your effort.

The World-Tier Difficulty is not limited to missions as it affects the whole difficulty level of the game's open world, as well as the maximum gear score for all item drops. This is an endgame difficulty only fit for Expert Division operatives.

Check Out What to Do After Beating the Game

Difficulty Amps Up the Higher the Tier

The World Tier system makes it so that the enemies you face will become stronger and tougher the higher the Tier you are in is. Veteran and Elite enemies will become more resilient to damage and will spawn more in higher World Tiers.