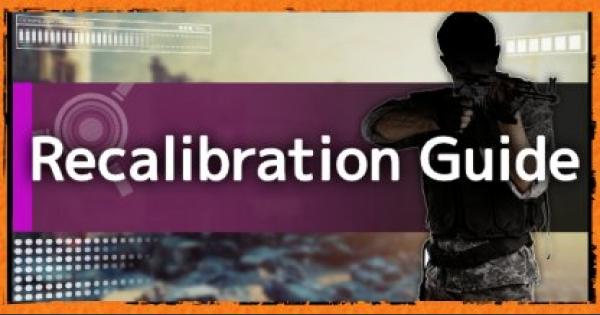 How To Recalibrate Weapons & Gear

Go To Recalibration Station In Base of Operations

To recalibrate your weapons and gear, head to the White House or your Base of Operations. The Recalibration Station can be found near your Crafting Station.

Check Out Base Of Operations Upgrade Guide!

Choose Weapon & Gear That You Want To Augment

Once you've opened up the Recalibration Station, choose the weapon or gear whose stat or talent you want to change.

Choose Stat Or Talent You Want To Change

Dismantle Weapon / Gear You Take Stat Or Talent From

After choosing the weapon or gear and the stat or talent, it'll open up a table of available weapon / gear / stat / talent you can choose from. Once you've decided, you'll dismantle the weapon/gear you've chosen & move its stat/talent to the weapon/gear you want to augment.

How To Unlock Recalibration

You need to recruit a specific staff member to open up your Recalibration Station. This NPC is named Emma Richards and she can be recruited from the Campus Settlement.

Level Up Campus Settlement To Level 3

To recruit Emma Richards, you need to level up your Campus Settlement to Level 3. This is done by completing Side Mission, Projects, etc.

What Is Weapon & Gear Recalibration?

Change Stat Or Talent Of Weapon Or Gear

Recalibration allows you to change the stat or talent of a chosen weapon or gear. This is a recommended procedure for players who are looking to optimize their equipment and builds for higher difficulties in the game.

Can Only Take Stat / Talent From Same Weapon / Gear Type

You can only take a stat or talent from the same weapon or gear. For example, if you want to recalibrate an SMG - the talent has to come from another SMG. The same goes for gear with the possibility of recalibrating both stat and talent.

Can Only Change 1 Stat Or Talent Per Weapon / Gear