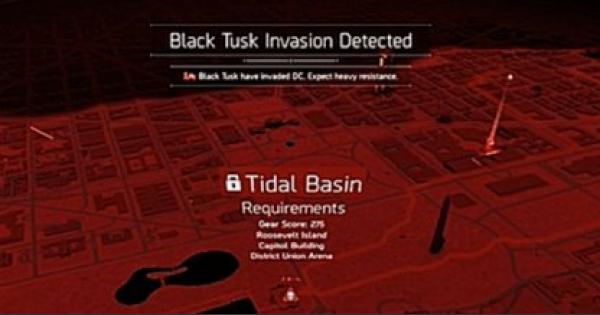 Read this Tom Clancy's The Division 2 guide to learn more about the end game Invaded Missions! Find out how to unlock these end game missions, where you can find them, and rewards for completing these missions!

Check Out What To Do After Main Missions!

After finishing the main story and reaching level 30, a new faction will take over Washington D.C. called the Black Tusks, and will occupy all story missions. They are heavily armored, and use advanced weaponry and tech, posing a greater threat to Division Agents

While the flow and design of missions are the same, Invaded missions feature a different set of objectives, as well as multiple named bosses for you to take on. Be careful as these bosses are tougher than the ones you fought before.

What Are World Tiers

How to Unlock Invaded Missions

Invaded Missions Are Unlocked After Beating The Story

After completing the main story campaign, a new cutscene will play signifying the Black Tusk's arrival. From then on, all story missions are marked as "Invaded".

Upon completing the Tidal Basin on World Tier 4 and unlocking World Tier 5, Invaded Missions and Strongholds will rotate on a weekly basis. Only a select few missions will be invaded during the week, so play through these missions to gain exclusive rewards!

Completing Invaded Missions reward you with unmarked SHD Supplies, Specialization points to progress your specialization tree, and gear that helps you raise your gear score.

Even at max level, you still continue to earn EXP which rewards you Field Caches. Completing Invaded Missions reward you with a huge EXP boost to help you earn caches.