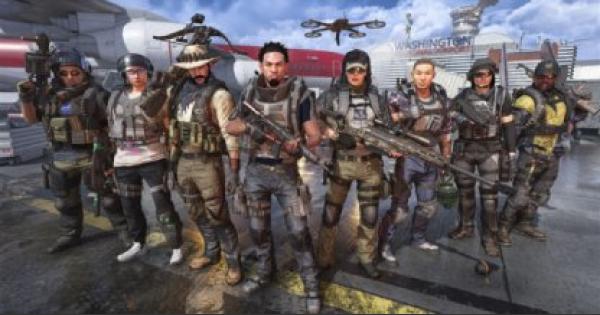 Check Out What To Do After Beating Main Missions Here!

Agents! Title Update 3 is live! You can read the patch notes here.

Take On The Black Tusk In An 8-Player Raid

Taking place at the Washington National Airport, the Black Tusk have mustered up their resources, technology and manpower for the most challenging fight Division Agents have yet to face. Prepare for unique mechanics, even tougher bosses and more in this 8-player raid!

Raid Launches May 16 9AM PT

The Operation Dark Hours Raid will be available for players worldwide on May 16, 2019, at 9AM PT. Below is a time conversion table to check out the start times in other time zones.

Players who take on the raid will receive exclusive loot dropped by its unique bosses throughout the raid. This includes new gear sets, an exotic weapon, as well as vanity items. The raid is protected with a weekly reset timer, and boss loot will only drop once a week.

Players who complete the raid first will have their characters and usernames immortalized in the base of operations for all players to see! Players who beat the raid in the first week will also receive an exclusive arm patch!

The Operation Dark Hours Raid will require players to be at least at World Tier 5 and Gear Score 490. Assemble a full team of 8 player at the helicopter pilot at the Base of Operations. Though a full team is not required, the difficulty is always scaled for 8 players.

Owners of the Year 1 Pass will receive 2 new missions called Classified Assignments. These missions will touch on the events that happened during the 7-month period between the events of New York and the Fall of Washington.

Together with the launch of Operation Dark Hours, there will also be an apparel event that will introduce new outfits, masks, emotes and weapon skins!

Commendations relating to time spent in-game such as "28 Days Distinction", "Distinguished Service Ribbon" & others have been removed as missing daily logins will require players to start over their streak. Players who've earned these distinctions will retain these commendations.

Raised base cap for Receiver Components and Protective Fabric crafting materials by 200. Also, Inaya al-Khaliq is now a Crafting Vendor, who sells you crafting blueprints.

As of Title Update 3, all exotic items upgraded through crafting will get the maximum Gear Score of the current crafting bench tier.

Armor and Health attributes have been improved on gear pieces you find in the game. Bonus Armor on defense attribute gear have been significantly increased, including ones you already have.

2 new attributes called Armor Percent & Health Percent have been introduced in Title Update 3. This now adds a percentage of your total Health or Armor stat, instead of a fixed amount.

Recalibration has been reworked so that majority of the stats will be transferred as they are, and will be less likely to be capped. This will now result to a separate Recalibration Score next to the Gear Score, and will no longer increase the gear score of an item.

Various changes have been made to how you acquire loot in the game.

After completing missions, players will now be able to see a summary of their performance in the mission.

Various changes have also been implemented to tweak NPC behavior and stats in the game.

Hive users will now be able to find +healing on Experimental Blend mods, as well as +radius on Network Firewall mods. Auxillary Skill Battery mod has also been introduced, which grants skill power for their corresponding skill.

XP from bounties have been increased, and all settlement Weekly Projects will now reward blueprints. A New Daily SHD Requisition project has been introduced, which requires crafting ingredients and rewards high quality gear & blueprints.

Certain skills have been modified in Title Update 3, and should fix various other issues related to skills.

Weapon Talents have been reworked, and rebalanced.

Gear Talents have also been reworked as part of the rebalancing.

Multiple changes have been made for weapons as well in this title update. Exotic Weapon mods will now carry bonuses as well, and now have increased damage. The TAC 50 Specialization Weapon now has 2 zoom states.

Check Out All Exotic Weapon List Guide: Talents, & How To Get

Balancing changes have been made to the Confict PVP mode, including armor boost reduction, scaling of all players to the Max World Tier Gear Score, as well as PVP specific overrides to affect weapon and skill damage.

Numerous changes and bug fixes has been made in this latest title update. For a full list of bug fixes, you may refer to the full patch notes on the official Division 2 reddit post.