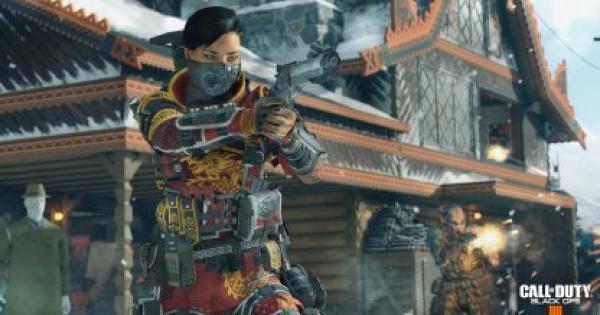 Learn about the significant changes made in the Nov. 20 - Update of CoD: BO4! This includes the Quad Feed, Nuketown in XBox One & PC, stability fixes, & more.

Players will be able to enjoy double XP, 2X Tier Boost, 2X Merites, and 2X Nebulium Plasma on Multiplayer Mode and Zombies - across all platforms!

Play Nuketown On Xbox One & PC

Nuketown will now be available to play in Xbox One and PC. This mode includes 6v6 Team Deathmatch, Kill Confirmed, Domination, & Hardpoint.

Nuketown has been addd to the MP playlists and will feature 6v6 Team Deathmatch, Kill Confirmed, Domination, and Hardpoint.

Zombies will start spawning in Nuketown Island in Blackout mode, with a new Zombies Stash spawn location behind the Nuketown sign.

You can now find Blackjack's shop in the Black Market with new wares & cosmetic items to unlock!

A variety of fixes have been implemented and adjusted on Multiplayer mode for XBox One & PS4. This includes addition of TDM 100, adjustment of Care Package delivery speed, and stability fixes.

Check Out the Multiplayer Guide & Tips

Care packages in Scorestreaks have an adjusted delivery times. Entry & exit speeds of delivery choppers have been reduced, among others.

Serpah's Tac Deploy only allows 1 respawn per use in Free For All mode.

Changes have been made for Atomic Drop, Spotter, and Air Cover with resolved issues and Challenge tracking fixes.

Additional global stability fixes have been implemented to prevent the game from crashing. Crashes in Blood of the Dead, Classified, Voyage of Despair, IX, & overall gameplay have been resolved.

Resolved gameplay issues about screen jitters during moving & changing attachments and when moving & healing. Bowie Knife can now also be found in Equipment Stashes and random drops from Zombies, etc.

Submachine guns changes that were implemented previously have been rolled back. This includes the Spitfire, Cordite, MX9, and GKS.