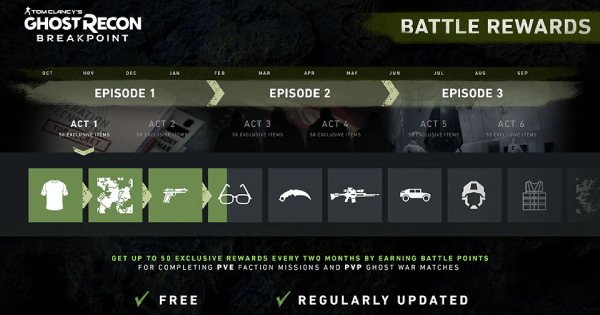 Read this Ghost Recon Breakpoint guide to know what Battle Rewards are. Including how to farm Battle Tiers or Battle Points to earn rewards per episode of the game.

How To Farm Battle Points / Tiers

Complete Faction Missions In The Game

The amount of Battle Points you can earn per day is capped at 400 BP as of now. This provides balance so that Ghosts will keep participating in Ghost War PVP and completing faction missions.

Get Item Rewards For Every Tier Earned

Items will be rewarded to Ghosts who earn enough Battle Points in the Battle Rewards system. These can be blueprints, cosmetic skins such as banners, and even battle supply crates.

When you get a battle supply crate as a Battle Tier reward, you'll get a random item from the pool of Battle Supplies rewards.

Each Episode Will Have 2 Battle Rewards Acts

Each episode in Ghost Recon Breakpoint will have 2 Battle Rewards Acts, making a total of 6 Acts that players can get items from in the system.

What Are Battle Rewards?

The Battle Rewards system is Ghost Recon Breakpoint's version of a Battle Pass. Ghosts have to earn Battle Points to level up their Battle Tiers to unlock their rewards.

Ghost Recon Breakpoint's Battle Rewards system will give Ghosts exclusive seasonal items for every unlocked Battle Tier. These are unique items that can be weapon blueprint, Ghost cosmetic skins, and more!