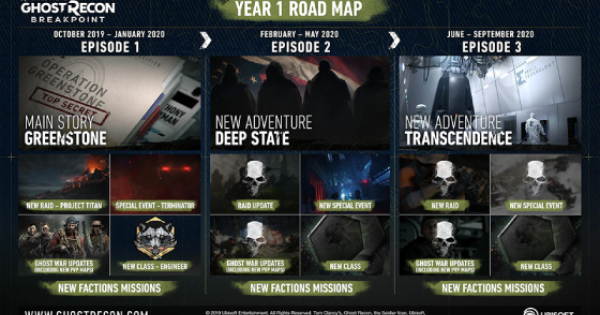 Project Titan will be the first raid in Ghost Recon Break Point and will be available for all players. Set in a volcanic island, players must work together to gain exclusive rewards and loot.

The first Live Event will feature the infamous T-800 from the Terminator franchise, as it arrives to wreak havoc in Auroa. Completing these time-limited events will reward players with time-exclusive rare weapons & items.

Players who purchase the Year 1 Pass will gain full access to the 2 new upcoming adventures in Ghost Recon Breakpoint - Deep State & Transcendence. These adventures give additional hours of gameplay plus exclusive adventure rewards.

Another perk that Year 1 Pass owners have is that they'll receive the Special Operation Forces Pack. This pack contains skins, Skell Credits, and items that are useful in the game.

Available on launch day, The Siren's Call is a side mission that Year 1 Pass owners will be able to access as soon as day one.

How To Get Year 1 Pass

The Year 1 Pass comes with the Gold, Ultimate, and Collector's Edition of Ghost Recon Breakpoint. The base edition does not have the Year 1 Pass.

Check Out Which Editions To Buy!

If you purchased the base edition of Ghost Recon Breakpoint, you'll be able to buy the Year 1 Pass later on as an individual buy. Prices and release date have yet to be confirmed.

What Is The Year 1 Pass?

In Ghost Recon Breakpoint, the Year 1 Pass is the game's version of a season pass. Players who purchase the Year 1 Pass will gain access to upcoming adventures, rewards, and content.