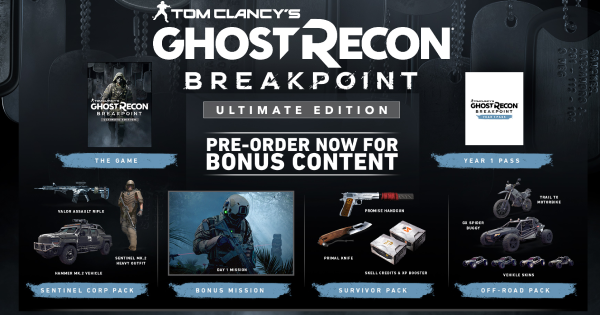 Standard Edition for Beginnners to Try

With just the base game, the standard edition will allow you to try out the game without committing too much for DLC and other packs. This is great for those who are new to the franchise.

Gold Edition for those Familiar to the Series

For those who want to get the most of the series without spending too much, the Gold Edition is the best one. It has early access and the Year 1 Pass!

Ultimate Edition for Fans of the Series

The Ultimate Edition contains all of the additional packs in addition to the Year 1 Pass. If you're planning to playing the game in the long-term, get this version!

The Wolves Collector Edition comes with the Cole D. Walker Figure and other game-related memorabilia. A perfect edition to those who love the series and want to have something to display it.

The Standard edition is as it says. It contains the base game and nothing more. This pack doesn't include the 3-days early access, meaning it can only be played on the official launch date.

The Gold Edition contains the Year 1 pass, the season pass for the upcoming DLCs of the game. It also has the 3-day early access so you can play it before the launch.

The Collector's Edition is a treasure trove for any diehard fans of the series. With a statuette and numerous game-related items, it also includes the Ultimate Edition of the game.