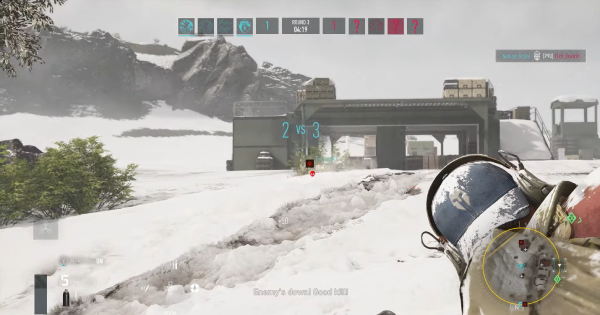 Check Out How To Play Multiplayer / Co-Op!

Fight In 2 Teams Of 4 Ghosts

In Ghost War PvP mode, Ghosts will be face off as 2 teams of 4 players. Ghosts have to eliminate players from the opposing team to achieve victory.

Skills & Loadouts Are Retained & Cross Over

PVP Mode Will Have Balance Changes

Ghost War PvP mode will balance Ghost skills & gear, making match victory reliant on the skills of each Ghost participating in the game.

6 Maps With Perimeter Closing In

When you play in PvP mode, you'll get to choose from 6 different maps - areas that you can find & explore in the Auroa Archipelago. The twist here is that the map's perimeter closes in over time, making the battle zone smaller & smaller.

Ghost War PvP mode will also have caches that contain syringes and drones. This is the only way you can heal or activate drones to recon enemy locations. Make sure to use your drones wisely as they can easily be spotted & shot down by enemies.

Each map will have a single surveillance system that will give you and your team a brief view of enemy locations when hacked. Be careful around this area as the opposing team will most likely be aiming to hack the system as well.

How To Play PVP

To access Ghost War PvP mode in Ghost Recon Breakpoint, go to your main menu and press the "Ghost War" tab. You can find it in the left-most tab of the main menu.

Once you're in the Ghost War menu, you can choose between Standard or Custom matches. These can be chosen right off the bat and you'll see the options immediately.

You can check the different challenges & achievements from the Ghost War Missions. Completing these challenges provide cosmetic rewards, among others.

Battle Against Other Human Players

Ghost War is Ghost Recon Breakpoint's player-vs-player mode that pits Ghosts against each other in 2 teams of 4. The goal is to test your skill against other human players.