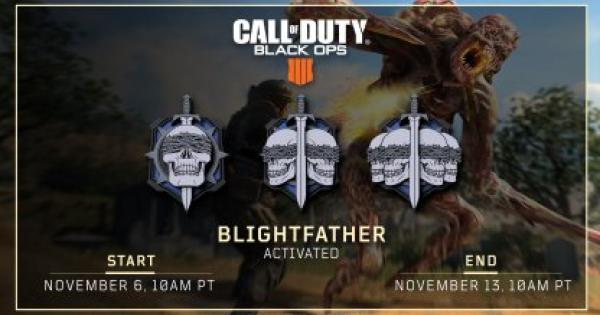 Learn about the significant changes made in the Nov. 06 - Update of CoD: BO4! This includes the Blightfather Event, Blackout weapon changes, Double XP weekend, and more!

2XP Weekend will be available for Multiplayer, Blackout, and Zombie Modes from Nov 9, 6:00pm UTC to Nov 12, 6:00pm UTC. Check for you local time via the converter included in the article below.

For a limited time, the Blightfather will be roaming the Graveyard south of the Asylum. A red pillar of light signals its location - try to take it out or pick off those who are engaging it.

Weapon changes to Blackout for this update resulted in a buff for all modified weapons and will result in better gun handling.

Concussion Grenades can now be thrown farther and the stack has been increased to 2.

Multiple gameplay issues have been fixed such as removal of exploitable bugs and issues regarding text descriptions.

Check Out The Multiplayer Guide

Fixed several functionality issues for reviving, ammo capacity, and Talismans. UI issues related to the Paintshop has also been fixed as well as the text descriptions for the Aftertaste Elixir and the Arsenal Accelerator Elixir.