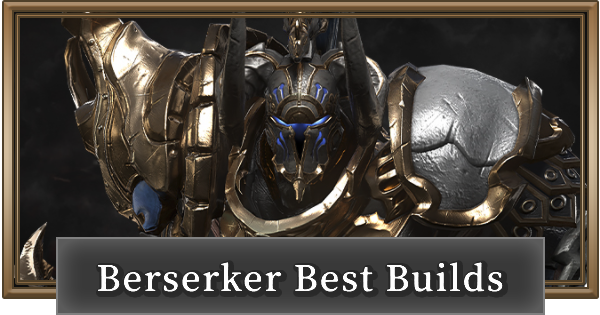 The builds below focus on the Mayhem Class Engraving for the Berserker. This engraving reduces your max HP to 25% but it significantly increases your Atk. Power, Atk. Speed, Move Speed, and decreases incoming damage by 65%.

The goal of this build is to max out the strongest AoE skills of the Berserker while having skills like Finish Strike to kill Challenge monsters on the second floor.

The goal of this build is to maximize your DPS against bosses by having skills with stagger and weak point while maximizing your damage with back attacks.

Mayhem greatly increases your offensive stats but will reduce your HP down to a max of 25% with 65% reduced incoming damage. This class engraving is a high risk, high reward engraving that players should use when they are confident that they will not get hit by attacks especially during raid content.

This type of Stat Tuning is exclusively for PvP.

Stat tuning in PvP is mostly fixed on all the advanced classes. The reasoning for this setup is that Swiftness increases your Atk. Speed, Move Speed, and reduces Cooldowns while Domination increases your damage against enemies who are affected with debuffs crowd control effects. The 1 point in Crit is used to enable critical hits in PvP.

Finish Strike will be the main skill you will be using as you are leveling up. Shoulder Charge will be used as a movement skill which can help you move around faster.

Skills To Use When Over 20

When you reach level 20, you should be able to set Finish Strike to level 10. Once you gain a few more skill points add them to Shoulder Charge to get the first tripod and restore your movement skill.

Tripods are game changers when it comes to the power of the skill. Obtaining Tripods should be your focus when leveling up the skills of your character.

Berserker is a class that deals consistent high DPS against mobs and bosses. It is a fairly easy class to use but gets significantly harder if player don't know how to manage their HP while in Mayhem.

The Berserker only has 1 viable Tripod that can be used for Team Synergy. However, using this Tripod will reduce the Berserker's overall DPS so it is often ignored in most builds.