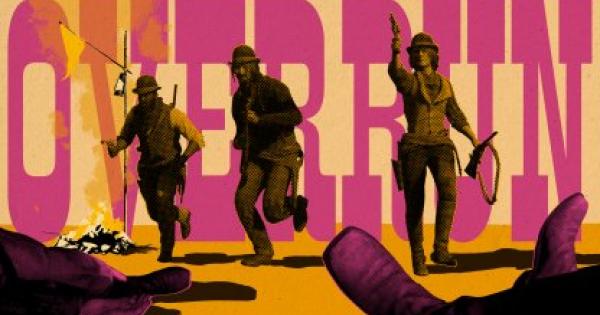 Read this Red Dead Online guide on the Showdown Series - Overrun! Read on for information on the game mode, gameplay tips, & more!

Time to grab some land! The Overrun game mode pits two teams against each other to take over as many territories as possible! Capture territories by running past them! The team with the most territories will win the bout!

First To 3 Bouts Wins The Match

Winning a bout is not enough! In order for you team to win in Overrun, you will need to reach 3 bout wins before the enemy team does!

A bout will last for as long as 1 minute and 30 seconds. In that time, you will have to secure as much territory as possible! Keep track of the time and adjust your play style accordingly to get the upper hand in a bout.

You will have an unlimited number of respawns in this game mode. However, due to the short time limit per bout, it is best to keep your respawning to a minimum in order to grab as much land as possible!

How To Play Overrun

Run Past Territory To Claim It

Claiming territory is as quick and easy as running past it. This makes the game very fast paced. Pick a route, and capture as many territories as you can before running into an enemy!

Check Your Minimap To Look For Territories

You can check your minimap in order to find territories that you can capture. Territories shaded in you team color belongs to your team, while enemy territory is shaded in their color. White territories have yet to be claimed.

Use The Bar Below The Time To Check Progress

As you capture territories, you will encounter enemy players doing the same thing. Engage and defeat them in order to claim the territory that they've left behind!