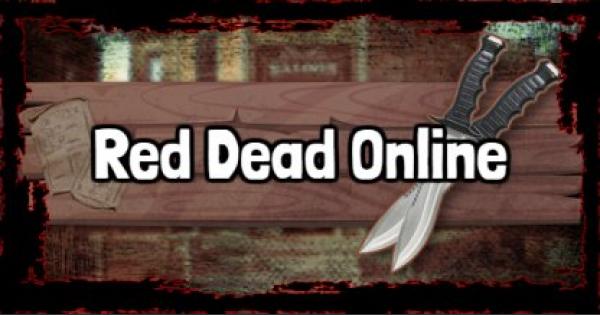 This guide includes everything there is to know about Red Dead Online, including its release date, content, and availability, more!

Red Dead Online has officially been launched in May 14, 2019. Rockstar has added more content and several improvements based on the feedback of players during the beta phase of the game.

Continue the saga of Jessica LeClerk as she tracks down her husband's murderer! Depending on your honor state, you will be able to choose different paths on how to solve the mystery; as a Gunslinger, or an Outlaw!

The update also brings with it new Free Roam Mission types and quest givers! Familiar faces such as Thomas the Skiff Captain and the Aberdeen Pig Farmers have been added to hand out quests for you!

The new LeMat Revolver features a 9-round chamber and a secondary barrel for a buckshot round. You will be able to switch between rapid fire, and using a shotgun shell on the fly! Available now in the Wheeler, Rawson and Co. Catalogue.

Poker Has Been Added

You will now be able to play Poker in 5 different locations: Blackwater, Saint Denis, Tumbleweed, Valentine and Flatneck Station. Challenge your friends at a private table, or try your luck against other players at a public table!

Red Dead Online has added new features such as the Play Styles and the Hostility System in order to minimize the instances of griefing, and make the Frontier more enjoyable for all players!

When you boot up the game, you'll see the option to choose "Online" from the title menu. This will then allow you to choose whether to Free Roam, do Story Missions, and challenge other players in Red Dead Online!

Create Your Own Gunslinger

Red Dead Online will have players create & customize their own character. After being released from the Sisika Penitentiary, you'll be able to freely explore the 5 states in the game.

Create Your Own Posse & Camp

You'll be able to create your own gang in Red Dead Online! With this, you can set up your own Camp to serve as your main base of operations.

Red Dead Online will allow you to choose how you want to play the game. With the introduction of Offensive and Defensive Playing Styles, the game aims to minimize the instances of griefing between players. You can change your Play Style in the Player Menu.

The Offensive Play Style is the default Play Style for all players. This Play Style lets you participate in several PvP modes, but will also not protect you from other online players out to get you!

The new Hostility System will track aggressive behavior for all Players across both Playing Styles. Hostile players are more visible to non-hostile players during Free Roam gameplay.

Hostile enemies will only be marked as enemies to players that they have attacked who in turn, will not receive any penalties for firing back at their enemies.

You will become more visible to other player's maps depending on how hostile you are. Hostile players will not be able to switch to a Defensive play style until their Hostility level is lowered after some time.

Red Dead Online will feature the same setting & gameplay of RDR2. With the same controls, items, and vehicles, you an explore the landscape, work on campaigns & heists, and even go fishing or hunting!

Set Before The Events Of RDR2

Red Dead Online's time and setting is set right before the events of Red Dead Redemption 2. Quest givers in online will also show up as characters in the story of the main game.

You'll be free to explore the 5 regions found in Red Dead Redemption 2 in this online multiplayer experience. There are many things to do and many new things to discover!

Red Dead Online will also have the same honor system as Red Dead 2. Players will notice that their honor state will affect the nature of the missions they undertake within the online scenario.

In Red Dead Online, there are missions you can undertake to earn more XP or influence your honor state.

There are two types of campaign missions in Red Dead Online - Free Roam and A Land of Opportunities. Free Roam are simple missions that can be done alone but A Land Of Opportunities need 2-4 players & involve more complicated missions such as heists, etc.

A Land Of Opportunities

A Land Of Opportunities are multi-part story missions. These require 2-4 players and are more complicated, often dealing with setting up heists, big robberies, and more as you help Mrs. LeClerk solve the mystery of the murder of her husband.

Free Roam missions can be activated by going near a Stranger icon. These can be done alone, or with a Posse, and is affected by your honor state. For example, honorable players will do protection missions while dishonorable players can stage a jailbreak.

Several high value targets have begun to spring up from several different locations on the map. Lawmen from different counties have released a bounty for these ruffians and it's up to you to bring them in dead or alive!

Players can also participate in a series of Showdown missions. These are competitive and will involve several game modes that have specific mechanics that challenge players to rise to the top.

This game mode is a classic shootout. Those who make the most kills will win the match. This mode also has unlimited respawns.

In Make it Count, players can either fight it out with only a bow and limited arrows or eliminate each other via throwing knives. The area will also shrink to make things more challenging.

The goal of Most Wanted is to rack up points & make it to the top of the scoreboard. Points are earned via kills & players with the most kills win. Eliminating players at the top will earn you more points.

Check Out Most Wanted Mode Here!

In this mode, you get to work in teams to capture territory which garners your team points. The team who has the most points win. Players can also capture every territory for an instant victory.

In this mode, choosing weapons that are harder & trickier to use while eliminating an opponent will garner you more points. Those with the highest points will win.

Check Out Name Your Weapon Mode!

This mode will need a whole lot of teamwork. Capture supplies from the central map area and bring them back to your base. You can also sneak past enemies and steal supplies from the enemy base to bring to your own!

Check Out Up In Smoke Mode Here!

This mode has 2-16 players madly scrambling around the map to grab the most land! Capture and hold the most territories during the match in order to win!

Check Out The Overrun Mode Here!

This mode puts both you and your horse to the test! Fast ain't gonna cut it partner. To win in this game mode you must be able to shoot at targets littered around the map, and be the first to cross the finish!

What is Red Dead Online?

Red Dead Online is the online multiplayer gameplay aspect of Red Dead Redemption 2 where players can band together or play against each other against the backdrop of the Wild West.

Red Dead Online will combine the features of the first Red Dead Redemption's multiplayer with the modern updates they've implemented in RDR2 to create a whole new, multi-level player experience.

Red Dead Online Beta will officially open on November 30, 2018. Rockstar will use feedback gathered during the Beta in order to further improve the online experience.

Players who have purchased the Ultimate Edition of RDR2 will get early access and will be able to play the beta on November 27, 2018, 8:30am EST.

Check Out Which Edition You Should Get Here

Red Dead Redemption Online will roll-out beta access to its players in the following schedule: