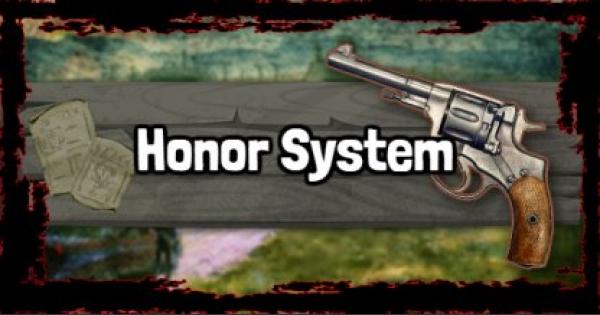 Learn about the Honor System in Red Dead Redemption 2 (RDR2), including how to raise and lower your honor, and what do you get when you reach certain honor levels.

Arthur's honor dictates how NPCs and other characters will react towards him. This can either be positive or negative depending on the choices you make for him.

Listed below are the effects of Arthur having high honor during the game's story.

Have a high enough honor and you will received discounts in stores .This starts off a reasonable 10%, but it can go up to 50% once you get the highest level of honor.

When you reach certain Honor Levels, you will received outfits as rewards. These outfits are unique and cannot be found anywhere else, so you can look good while being good.

Below are the effects of Arthur having low honor during the game's story.

Bring down your honor to its lowest and you'll have a perk that slightly increases the chance of finding specific items in dead bodies. Useful when you're a desperado killing your way through the Wild West.

How to Check Honor Level

Press the Down Button in the D-Pad

Pressing the down button on your D-Pad will show your Honor Bar, as well as your current objective. The Honor Bar will indicate how high or low your honor is based on the icon placement and its color.

Go to the Player Menu

You can also check your Honor through the Player Menu. You will find it in the generals tab and it will also indicate which perks you've unlocked for that honor level.

How to Raise Your Honor

Acting like a generally good person in Red Dead Redemption 2 is a sure fire way of raising Arthur's honor. This could be done from resolving conflicts peacefully to completing jobs.

Random encounters will appear as you travel through the land. Go out of your way to help out the people and you will see a slight boost to your honor.

Surrender to the Authorities

Surrending to the authorities instead of fighting back when caught committing a crime will help raise your honor! You'll have to wait a few days to get out of jail though.

Spare your Opponents in Duels

Just like in the previous game, a good way of raising your honor is by choosing to spare your Duel Opponents instead of killing them. You can do this by disarming them!

Check Out How to Win Duels Here

Donate Funds to the Camp

Make sure your camp is well-fed and well-stocked and you will see a boost to your honor. There's no set amount you should donate to the camp to get a boost so it's best to do it regularly.

How to Lower Your Honor

Embrace your dark side, become a full on desperado and commit crimes left and right to lower your honor in Red Dead Redemption 2.

Assaulting innocent men and women will cause a drop in Arthur's honor. You will also get a drop when threatening civilians with guns.

Commit Burglaries Across the Map

Burglaries will help you lower your honor, but at the cost of having a bounty on you head. It's best to just hold up carriages on the road to make sure you don't get caught by Lawmen.

Deciding to take another rider's horse is considered dishonorable in Red Dead Redemption 2. Arthur's honor will go down from doing such an act.

What outfits are unlock based on honor level?

You can increase your honor by greeting strangers when encountered as well. You get an upward tick in honor for every three different persons you greet.