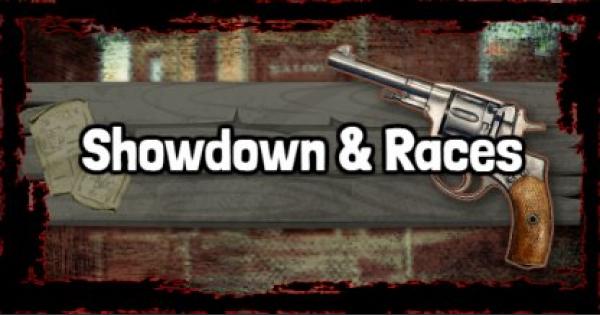 Learn about the different game modes in Red Dead Online! Check out this guide & list on the different showdown series & races you can find in-game.

Check Out What Is Red Dead Online!

Kill As Much Players As You Can In Shootout

Available in solo or team mode, Shootout is Red Dead Online's version of a battle royale with the addition of unlimited lives. Players rack up points by making kills and those with the most kills or points will win the match!

Rack Up Your Points In Most Wanted

In Most Wanted, players have to eliminate their opponents to get points. It's a race to get to the top of a scoreboard and eliminating other players with high kill counts will give you better scores & higher points!

Check Out Most Wanted Here!

Gain Control Of The Play Area In Hostile Territory

Only available in team mode, Hostile Territory will have teams capturing positions and holding them to get points. The team with the highest amount of points, or those who capture all territories, win!

Be Resourceful In Make It Count

In Make It Count, players can only use a limited amount of arrows or throwing knives to make their kills. The last and most resourceful person standing in this mode wins the match!

Check Out Make It Count Here!

Players who use the trickiest weapons to make their killing blows will get higher points in Name Your Weapon! The player with the highest number of points in this mode will win the game!

Check Out Name Your Weapon Here!

Hoard All The Loot In Plunder

Plunder will put 3 teams against each other as they fight and steal their way to victory! Stealing loot from the central area and bringing it back to your base will award you points. You can also steal from the enemy's base for points!

Get Behind Enemy Lines In Spoils Of War

In Spoils Of War, two teams fight head to head in a looting fest! Steal loot from the enemy base and bring it back to your base to score points! Be careful as enemies will be heavily guarding their base!

Check Out Spoils Of War Here!

No Place Left To Hide In Up In Smoke

The goal of Up In Smoke is for your team to blow up the enemy's base before they blow up yours. This intense game mode will have you delivering explosives to the enemy base in order to blow it up!

Check Out Up In Smoke Here!

Grab The Most Land In Overrun

A tug-of-war game mode with a twist! Overrun will have you and your team capture the most territories in a short amount of time to defeat the enemy team in a bout. First to 3 bout wins will reign supreme!

Check Who Rides Fastest In Races

Red Dead Online's map will have a series of races scattered around it. Players can compete in lap, point-to-point, or open course races to see which one can ride the fastest!

Steady Your Aim In Target Races

A fast horse will not be enough in Target Races. You will also need to have a steady aim and a sure trigger finger! In this kind of race, you will not be able to progress through the course until you hit targets littered across the map!

What Are Showdown Series & Races?

In Red Dead Online, the Showdown Series are modes that are highly competitive. Players are pitted against other players in different scenarios for action-packed, fast-paced gameplay.

Races Are A Test Of Horsemanship Skills

Red Dead Online also offers players to show off their horsemanship & racing skills. Races can be found all throughout the map and can be played by 16 - 32 players simultaneously.

Players Can Choose Which Horse To Use

Players have the option to choose which horse to ride in races. For laps, horses with good stamina are the best while high-speed breeds are perfect for point-to-point races.