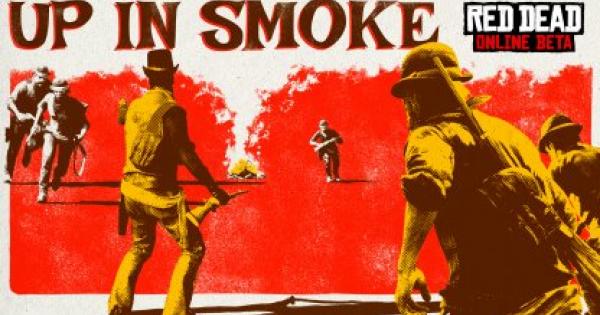 Check out this Red Dead Online guide on the Showdown Series - Make it Count! Read on for information on the game mode, gameplay tips, & more!

Up In Smoke Overview

Up In Smoke Summary

Up In Smoke pits two teams against each other in a mad dash to blow up each other's bases! Deliver explosives to the enemies base, the first team to blow up the opposing base wins!

There Is A Time Limit To This Game Mode

This game mode will have a countdown timer. If no bases have been destroyed once the timer reaches 0, the team with a healthier base will win.

Unlimited Respawns During The Match

You will be able to respawn as many times as you need while playing this game mode. However, it will take some time before you are back on the field. Make sure that you keep safe when delivering explosives to the enemy base!

How To Play Up In Smoke

Walk Over Explosives To Pick Up

You will be able to pick up explosives by walking over them. Sparks will emanate from your character once you've grabbed them. White explosive icons have not yet been picked up while fully colored explosive icons are being carried by players.

Make Your Way To The Enemy Base

Now that you have the explosives, you will need to make your way to the enemy base. Be careful as there will be enemies heading for your base as well. Move from cover to cover to avoid getting fatally hit!

Drop Explosives At Enemy Base

Once you've made it to the enemy base, drop your explosives and clear the area! You will be able to deal some damage to the enemy's base once it explodes!

Rinse And Repeat Until Completely Destroyed

Once you've damaged the enemy base, grab a new set of explosives to deliver! Once you bring down the opposition's base health to 0, you win! Alternatively, you will also win if your base has higher health when the timer reaches 0!