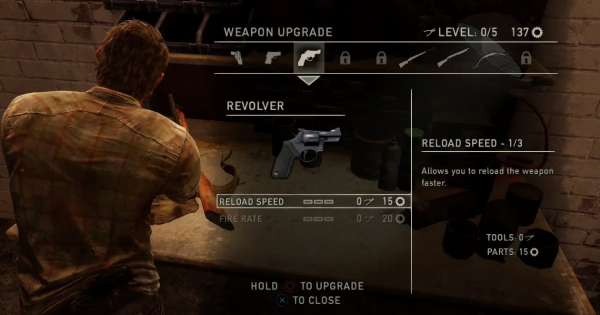 The Last of Us
Weapon Upgrade Guide - Upgrade Priority

Learn all you need to know about weapon upgrade in The Last Of Us in this guide! Including priority, tools, recommendation & more.

How Do You Upgrade Weapons?

Weapons like conventional firearms you acquire throughout the game can be upgraded at a workbench found throughout the world. You can use a Tools and Parts to upgrade your weapons. The amount of Tools you possess dictates the level of upgrades you can apply. The Parts are materials consumed when applying the upgrade.

Upgrading weapons will allow you to upgrade the following stats:

Note that not all weapons share the same available upgrades due to how these weapons work.

Certain melee weapons you find such as the 2x4 can also be upgraded with some kind of blades and binding after unlocking a skill. Unlike ranged weapons, Melee weapons does not require a workbench, and can be created from crafting menu.

Upgraded Melees Are One Hit Kill

Upgraded Melee weapons will allow you to deliver one hit kill on most enemies. These blades will only last for few blows before it breaks off.

The weapon upgrades you want to invest, ultimately boils down to your preference. However, here are some items we found useful that you may use as a reference when choosing which weapon / upgrades.

Long Gun Holsters will be a great investment early on, allowing you to carry an extra long gun weapon. The Pistol Holster may also be considered viable, but are not as versatile considering compared to the effectiveness of long guns.

Perfect for silent takedowns and having great ammo economy thanks to being able to recover arrows, the Bow are very useful weapon for all mid-range engagements. Upgrading the weapon for Range will further help taking down enemies safely.

A deadly close range weapon needing no introduction, the Shotgun can be grabbed relatively early on in the game while packing a punch, perfect for taking down tougher enemies. Upgrading the Range will allow you to increase the most effective range of the gun.

Acquired late in game, the Flamethrower is a deadly weapon for human and infected alike. Each pull of the trigger will ignite the enemy on fire, effectively neutralizing them while they fray around on fire. You can further enhance its traits by upgrading Range and Damage.