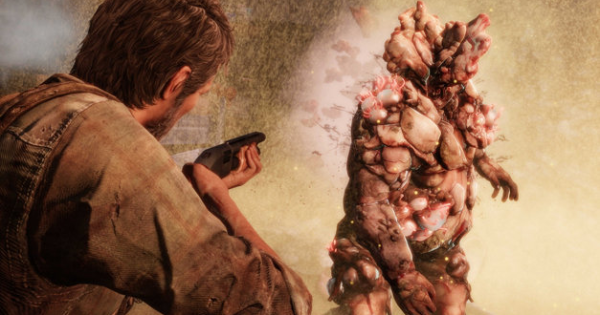 The Last of Us
Enemies Guide - Enemy Types & Faction List

Learn all you need to know about all enemy types and factions found in The Last Of Us in this guide! Including each faction and names, lores, traits, weakness for enemies & more!

These creatures are what remains of the victims of the Cordyceps fungus plaguing the land. Those infected by the fungus will slowly form a fungi growth within the brain and cavity, destroying their normal brain function and mutating those into mindless creatures assaulting any human they come across. These Infected goes through multiple level of mutation; dubbed by the survivors as Runner, Stalker, Clicker, and Bloater in order of severity of its mutation.

The Runners are the first stage of the Cordyceps mutation taking hold of the human body. Although it retains most human characteristics, it can be distinguished by its orange lit eyes. They only attack once provoked, and become very agile in contrast to their passive state.

The second phase in their mutation, the Stalkers can be distinguished with the fungi growth protruding from their eye / nose cavities. These creatures act hostile against any nearby human, often moving from cover to cover as they hunt their prey, hence the name Stalker was given. They can also be identified with the distinct croaking noise it makes.

Third phase into the mutation, the Clickers have upper head completely overtaken by the fungal bloom, and now possess inhuman strengths, making them extremely lethal predators. The Clickers, because of the fungal growth, have lost the sense of sight, and makes clicking noises as a means of echolocation to identify its surroundings and target. The fungal growth on its face is actually very resilient against blunt force and small caliber bullets.

The final phase in the Cordyceps mutation, the Bloaters are a shambling mass of fungi, making them virtually a fully armored tank with inhuman strength. Now fully covered in fungal growth all over its body, it is impervious to most blunt trauma but makes them very flammable. It is slow, and it's echolocation are less efficient to its previous form, but can utilize fungal growth as gas bombs, allowing them to kill from range.

As the name suggests, the Survivors are the few remaining uninfected population, usually surviving in area outside of authority controlled quarantine zones. These survivor groups are usually operating in small teams, mostly unaffiliated from each other, and taking no remorse in doing whatever it takes for them to survive. Most of these groups are hostile in nature. Amongst them few large groups acting as factions exists, namely the Bandits, Hunters, Smugglers, and Cannibals.

Rallying under an iconic symbol, the Fireflies is a militia group formed in response to the military oppression within the contamination zone, in aim to someday restore peace and actual government authority.

Being the only surviving remnants of the authorities post-outbreak, the Military are a hostile faction, originally serving as United States Armed Forces in joint operation with Federal Disaster Response Agency (commonly referred to as FEDRA) taking martial law into action to take control of the panic following the pandemic. The Military still keeps its operation within local quarantine zones, using their military superiority to keep order within that zone by force.

The so-called Hunters are groups of survivors that preys on any unsuspecting people wandering into their territory. Residing in areas around Pittsburgh, these individuals mostly consists o ex-residents of the Quarantine Zones, which they were abandoned by the Military, being forced into this murderous life.

Residing around most non-quarantine areas such as the Jackson County, the Bandits resides in more rural areas of the world, actively venturing on raids to pillage unsuspecting victims. These groups consists of survivors residing far from the quarantine zone, and needs to look for actual preys unlike Hunters, which wait for their prey to wander into their territory.

Smugglers points to specific groups working in secrecy around the quarantine zones, acquiring and delivering illegal goods across military check points. These goods they acquire includes food supplies, ammunition and weapons from the black market usually outside of the quarantine zone. Joel, along with his partner Tess was a Smuggler operating around Boston quarantine zone.

Residing mainly around the Colorado area, the Cannibals are distinguished literally by their actions what they ware named. They kill and consume human any victims unfortunate enough to wander into their territory, in means to acquire food due to its shortages in their residing area. These groups includes women and children, and are relatively well equipped aside from shortages of foods.

About Enemies In The Last Of Us

Killed Enemies Will Not Respawn

Each enemy in The Last of Us is considered a unique entity and an individual, as far as to each of them having their own name. Unless you restart from the checkpoint, all enemies (including Infected) will not respawn during that playthrough and will be their permanent death.

Unlike the Infected, human enemies you meet will utilize tactics and weapons to attempt to take you down. Take cover, listen and check your surroundings and try to deliver a lethal strike first to lessen the number of guns pointing at you.

Infected Enemies Are Weak Against Fire

All Infected enemies are especially weak against fire due to their fungi growth. These growth will act as a shock absorber of sorts in certain cases, dampening the effects of your conventional weaponry. However, burning these with Molotovs and Flamethrowers will make them brittle, and severely weaken or downright kill the Infected.