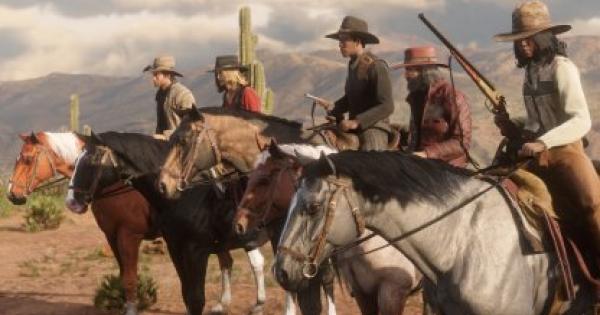 Check out the Feb. 26 update for the Red Dead Online beta! Including information on player visibility, bounty hunters, balancing of laws, daily challenges, and more!

Check Out What Is Red Dead Online!

The first batch of updates for Red Dead Online is now live! From new game modes, weapons, world enhancements, and gameplay features, the update offers an exciting turn for the game!

New features and more coming to the Red Dead Online Beta on Feb 26th with new improvements and enhancements to the game’s open world, including a new Law and Bounty system, weapons balancing, changes to player blips on the mini-map and more. https://t.co/MOSaXStj7m pic.twitter.com/huXgpk4Dcd

Red Dead Online will also have new daily challenges that will have you complete missions across all aspects of the Wild West. You'll earn Gold Nuggets & XP from simple fetch quests, hunting, clearing hideouts, and more.

Complete All 7 Daily Challenges for a Bonus

7 random daily challenges will be released every day, each with their own corresponding XP and Gold Nuggets rewards. Players who are able to complete all 7 will get a reward bonus!

Test You Skills in Fishing Challenges

Players can now challenge and participate in Fishing Challenges against friends and rivals! Bait and fishing equipment will be restricted to the challenge requirements and whoever has the highest total weight of fish wins!

According to the official patch notes, new game modes will be added to Red Dead Online Beta every week from today. So far, the developers have only revealed the ones for the next 3 or so weeks.

Ride and Shoot Down in Target Races

Put your riding and shooting skills to the test with the new Target Races Game Mode! Cross the finish line and take out targets on your way there to win the race.

Up in Smoke, Spoils of War, and Plunder are 3 new showdown modes slated to be added to RDO in the next coming weeks. Prepare to outsmart enemies to capture and deliver bags, steal loot, and survive.

Check out selection from Wheeler, Rawson & Co. Catalogue and your local gunsmith to get your hands on the Rare Shotgun. A more decked out version of the double-barrled longarm, it's both strong and stylish.

The Evans Repeater is coming to RDO soon. This high grade, high capacity rifle is a great companion in battle as it can mow down enemies both in medium- and long-range engagements.

Made from the skull of an animal's jaw, The Jawbone Knife is a beautifully carved and very dangerous weapon. It's currently only available for Playstation 4 Players.

In the update, player blips will be harder to see over long distances. Your map position won't be shown to other players unless nearer (around 150 meters), making it harder for others to continuously target the same players.

Players who are aggressive and continue to be hostile will be more visible on the map. Instead of blue, your player blip will turn a darker red the more aggressive you are in the game.

Players who are killed once can initiate a Parley to their attacker's entire Posse, as compared to the previous need of at least 3-4 kills before a Parley can be initiated. This can prevent crazy amounts of aggression within the game.

Bloodshed can also be prevented by instigating a Truce between the 2 rival groups. A temporary truce can now be initiated after 1 kill.

Feud With Posse Or Leader

The same as Parley, Feuds can be initiated only after one kill. Players can start a Feud with one member, an entire Posse, or with the Posse Leader, allowing them to air their grievances in an all-out timed death match.

Bounty values will now increase according to the kind of crime a player commits. Murder will have higher bounty values while stealing and looting will only decrease your honor levels.

If your bounty level goes way up and you exceed the threshold, you'll be wanted dead and Bounty Hunters will aggressively chase after you. The higher your bounty, the harder it will be for you to escape the NPC Bounty Hunters.

Deck out your cowboy in the latest styles with the cosmetic items available in RDO. New outfits, boots, coats, gloves, hats, and vests are now available for purchase!

Don't forget to check the Catalogue every week to see the new Limited Time items. These items are only available for a week before they're removed from the Catalogue.

Show Off What You Feel with New Emotes

The Wheeler & Rawson Catalogue has been updated with new emotes! With new reactions, greets, and taunts, you'll be sure to find something to express what you feel.

The Varmint Rifle will receive a re-balancing. Players will notice that its accuracy will be leveled the same way as other long arm weapons in Red Dead.

Voice chat will be fixed to work better in shorter distances, horse cargo fixes are being resolved, and pelts & carcass issues are being fixed.