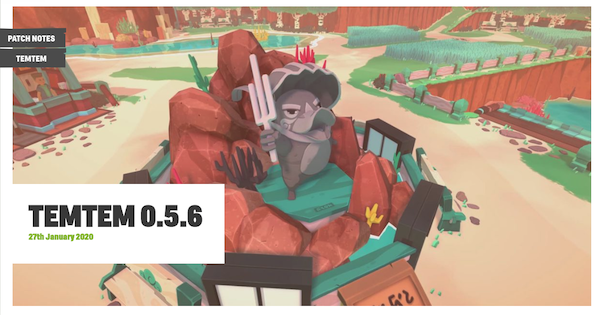 Details Of Roadmap Up To Spring 2021 Release

Just as promised, Crema has delivered the second part of their roadmap, indicating their path forward from Winter 2020 to Summer 2021, after the game's official planned full release. There's a ton of exciting content planned, including the final island release in Winter 2020, as well as a special hard mode difficulty in Summer 2021. Stay tuned for more!

Major Patches To Hit Every Season

Crema has finally published their official road map for the game going forward! It seems that major updates will be coming in Spring, Summer, & Fall 2020, with new Islands being launched in the latter half of the year.

The first update to come will include Clubs & In-game chat, as well as additions to competitive matchmaking modes, which should serve to revitalize the game's community!

Crema and Humble Bundle, the developers/publishers of Temtem, just released a slew of new information detailing the amount of copies Temtem has pushed out, player statistics, & their plans going forward!

Check Out The Details Here!

These are the patch notes for 0.5.12 https://t.co/wXwEreBQdi

We'll be pushing the patch to Steam/Discord and re-opening the server soon. pic.twitter.com/h5gPk7UtmT

On February 17th, 2020, the Temtem team made an unexpected new patch announcement. This is the biggest content update to do date & features a new area called the Saipark, where you can catch 2 different species of Temtem every week which also have a chance of being stronger and possessing egg moves.

Making Of Temtem Up! Video

As with everything we do, there was a lot of love & effort poured into the production of "Temtem Up!".

Here's a sneak peek into the making of, so you can check out @_damiansanchez and its crew doing what they do best. pic.twitter.com/f50oM2HdSQ

The official Temtem Twitter account posted a video featuring a behind the scenes view into the creation of the song Temtem Up! Fans of Temtem's music should definitely give this a watch!

Many Bugfixes And Balance Changes

Crema Games have been releasing continuous patches since Temtem's release one week ago to address bugs and other issues. In this new patch, they added an in-game notification before servers go down, fixed cases where Temtem were lost during trades, & more! For details, check out the full patch notes.

▲The above link will redirect you to the Temtem official website!!!

At long last, Early Access to Temtem has become available! The game launched with some server issues which prevented players from going online, but was patched relatively quickly. Temtem is now available for purchase on Steam!

Check Out Our Review Of Temtem Here For More Info On The Game!